Ritual breads from a hundred villages of Ukraine 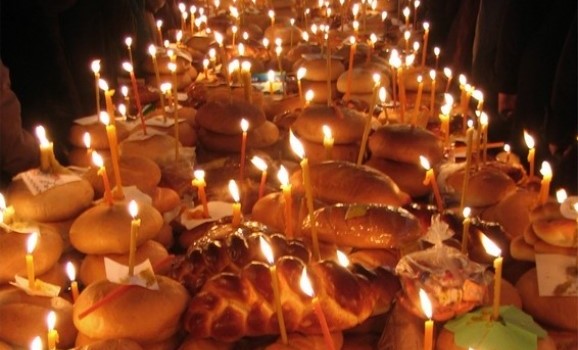 National Commemoration Exhibit of Ritual Breads “Pechu, pechu khlibchyk…” (I am baking bread) and the play Grinders will take place at the Ivan Honchar Museum on November 25 – December 8.

This event is dedicated to commemoration of those who died during Holodomor in 1932-33. Folk band Bozhychi and famous kobza and lyre player Taras Kompanychenko will perform as well. Deputy director general of the National Folk Culture centre “Ivan Honchar Museum” Tetiana POSHYVAILO says: “While rocking the infant in the cradle, the mother hummed simple songs about bread and by this revealed the essence of Ukrainian grain growing nation starting from the first days of child’s life. Through bread the child discovered deep code of bread-making ansectors and joined it. Starting from that moment, every important event, every holiday, every day of life will not occur without bread. People spilled some rye into infant’s cradle, godparents-to-be took bread to the church, young men took it with them while they were going to propose, a young couple was blessed before their marriage with bread, people paid last tribute to the deceased ones with bread too.

Our nation knows and remembers a few hundreds of names and kinds of breads, that are different in every region. And each one of those kinds became a symbol of uniting of human being and the world at some point of time. The very essence of Ukrainian nation is unseparatedly tied together with bread. By taking bread from Ukrainians, they did not just physically starved millions of people, but they destroyed the most important thing – their spiritual world. Ukraine could have been different today.”

Almost 100 Ukrainian villages from various parts of Ukraine will bake ritual breads that will be represented at the National Commemoration Exhibit at the Ivan Honchar Museum in memory of millions of people, executed by Holodomor, those who were not mourned after, not buried, not prayed for. In memory of lives that were not fully lived, children, grandchildren, great grandchildren that were not born…

Museum workers urge Kyivites to come and commemorate relatives and compatriots, light a candle and discover the lost wealth of the bread-makers nation, see unique variety and beauty of ritual breads that passed that deadly line, remember and will tell those to come to remember too.

If you find a mistake in the text, select it and press Ctrl + Enter, please
RecommendGo to Shop
Related Posts
What's newAll news
Subscribe to NewsletterHide
1148 users has subscribed
Subscribe