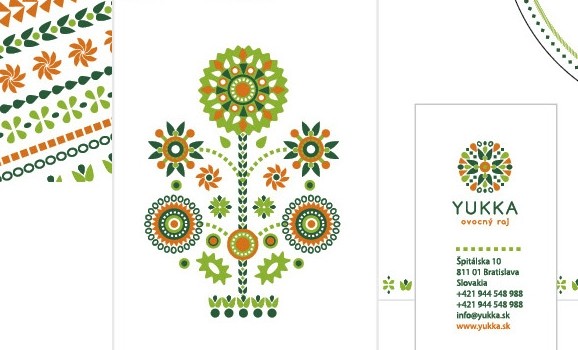 Design indeed plays the key role in perception of space and things. It can be really beautiful with a lot of content in addition. In folk arts, this content is created by ornaments and symbols. We’ve become interested whether there were any people who used such symbolism among the participants of All-Ukrainian design contest called “Ukrainian Design: The Very Best Of” which took place this summer. We can say at once that such works were not numerous but we managed to find some anyway…

Among the corporate identities of different companies the logo design of the All-Ukrainian Charitable Fund “The road of the future” is distinguished by its simplicity and laconism. It was developed by a graphic design bureau “Artemov Artel”. According to the designers, right from the start they had it as an objective to develop a symbol based on the Ukrainian traditional motifs which would correspond to the name and the main areas of the Fund activities, namely the following: organization of ethnic, ecological and art festivals for children; of educational workshops and trainings for youth and teachers; targeted charitable help to sick children and children’s institutions for children deprived of parental care etc. The idea of the proposed logo was a rushnyk decorated by human figures holding their hands. Due to its shape, the rushnyk is always associated with the road and life. It symbolizes purity, purification, sanctity and generosity; it protects the owner from all offences. In the course of centuries the rushnyk has been playing an important role in all ritual events such as birth, baptizing, wedding, seeing-off people to long travels or wars. The rushnyk is a symbol of a wish for a happy life and memories about home; it is also a luck talisman. The rushnyk idea is amplified by extension of the logo to the other side of the visiting card thus symbolizing the road of the time to come. 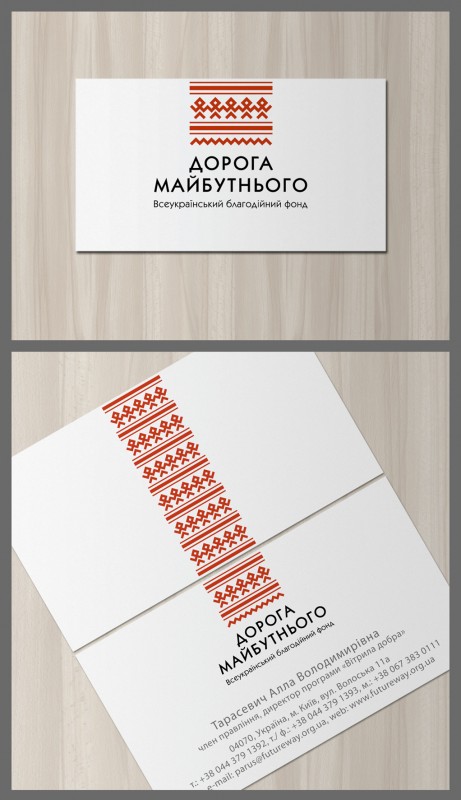 The logo and the corporate identity for the Slovak company Yukka that produces fruit bouquets and candies from fresh fruit were developed by Daryna Podoltseva. A conventionalized image of such a bouquet, its appearance from above, was taken as the basis for the design. The bouquet itself strongly reminds an ancient symbol of the Tree of Life which is often found on old Ukrainian rushnyks and pysankas. 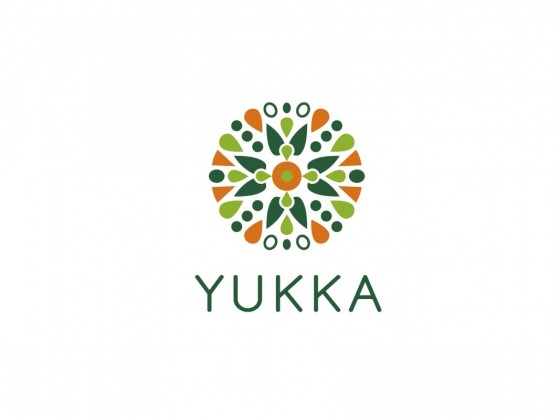 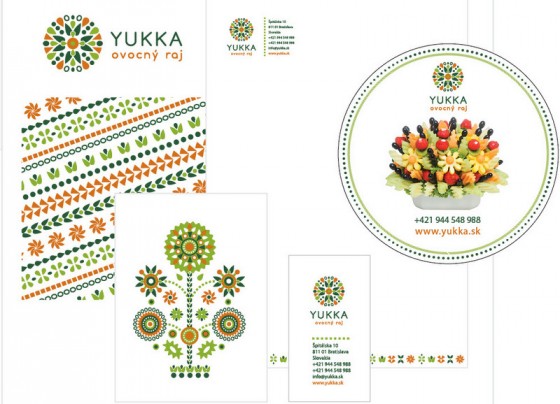 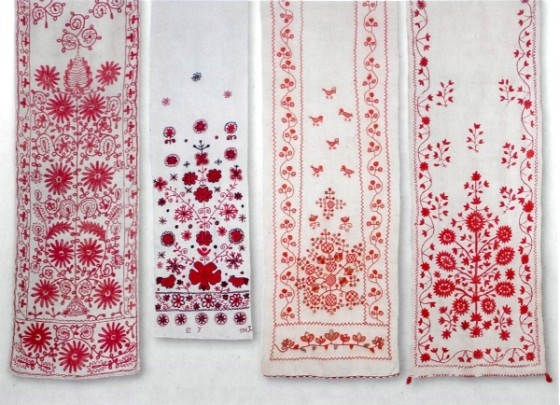 Variations of the Tree of Life on rushnyks; a photograph from http://about-ukraine.com

Strix is a new clothes brand with national motifs. Yarche digital agency has developed the ornaments based on decorative Petrykivka paintings and used them in the corporate products of the company.

Folk motifs are clearly seen in the design of book covers of the poetic anthology in two volumes called “Red and Black / Black and Red. 100 Ukrainian poets of the ХХ century” published by the “Educational Book – Bohdan” publishing house in 2011. The volumes are divided as follows: “Ladies” volume – 1344 pages and “Men’s” volume – 1376 pages. Creative workshop “Agrafka” was entrusted to make covers for such volumetric books. 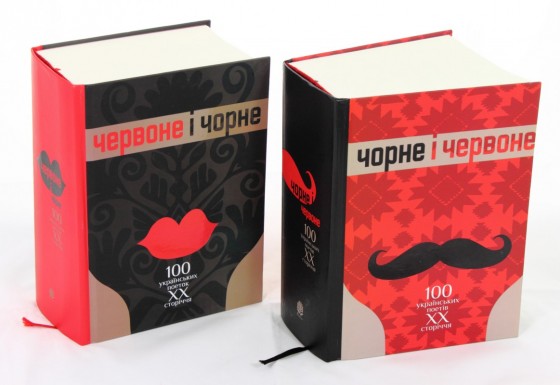 Eugenia Homenko has made an effort to conventionalize QR-code accordingly in her work called “The nation code”. 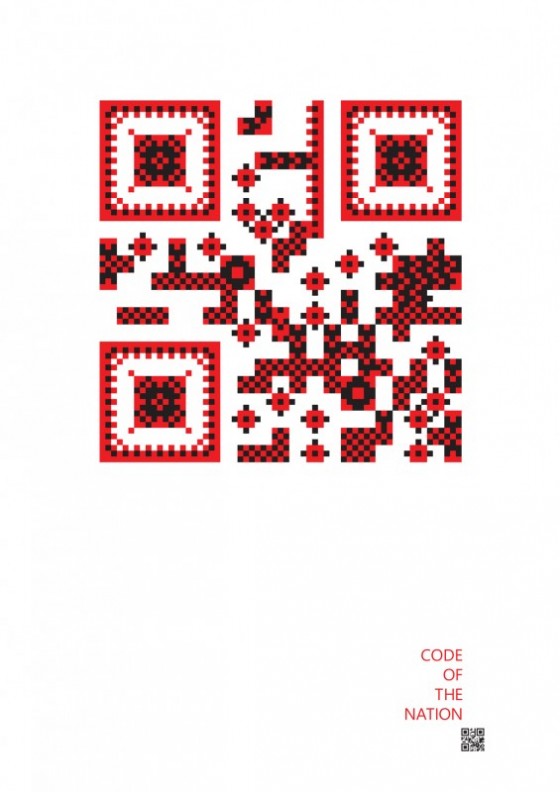 Lesya Orlova has created a new interpretation of embroidery. Now, the embroidery is a separate component which exists independently and can be easily taken off the shirt and at the same time fits any shirt from your clothes. Besides, you can now wash your shirt being sure that the embroidery will not fade or lose its color. 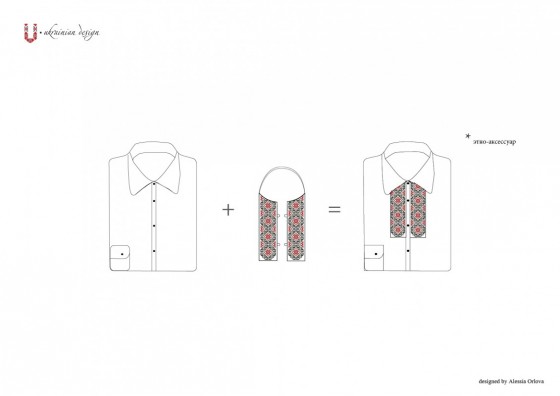 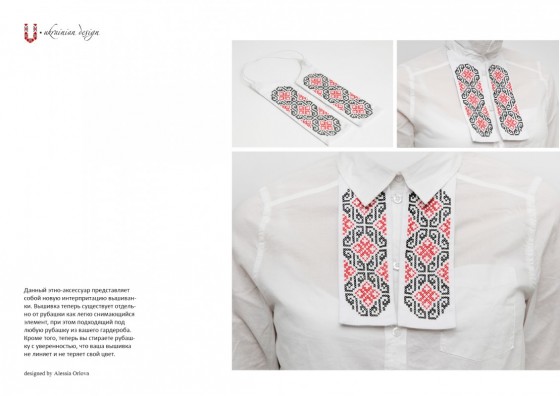 A diorama-model “Ukrainian khutor (a farm-stead) of the ХІХ century” right under your feet, on your floor. Such an art object was created by an architectural and model studio “3Dmaket”. As a basis, they have taken a classical settlement layout at the central Ukraine territories with common life scenes. The model is completely handmade using natural and artificial materials (wood, plastic etc.). The scale is 1:87. The size of the model is 240 x 90 cm. Internal lighting is also used in the model which is located in the hall floor covered with glass. 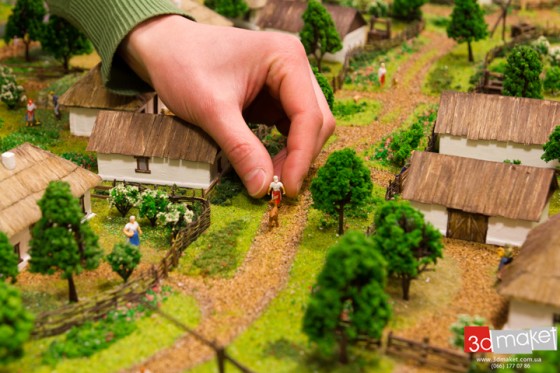 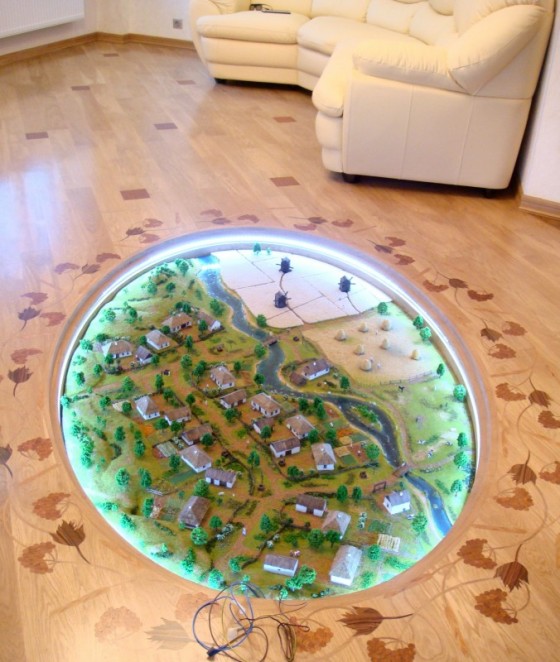 Serhiy Suntsov, a Kyiv designer, has decided to work in design of different objects and to create special shapes for ordinary ceramic mugs; also, he found a new function for the famous makitra (a bowl for grinding poppy seed) – lighting of the room. 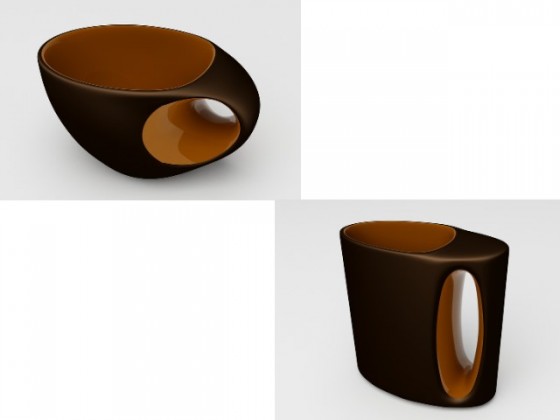 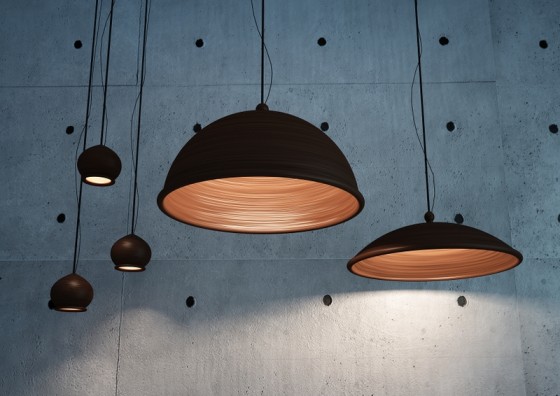 Lada Talanchuk and Bohdan Yakymchuk have created a collection of original fabrics for decoration of interior. They used such fabric processing techniques as manual dyeing, free painting, vytynanka, application, embroidery.

Zoya Olephir has created a gypsum picture “Red patches”. By its colors, it resembles a Hetman style or nobility clothes. The picture is made of gypsum reinforced by admixtures. Its size is: 1.52 x 1.52 meters. Raised carving on gypsum was made manually. Zoya coated it with acryl paints and made gilding with metallic paints. The set of used technological approaches has resulted in the vintage effect. 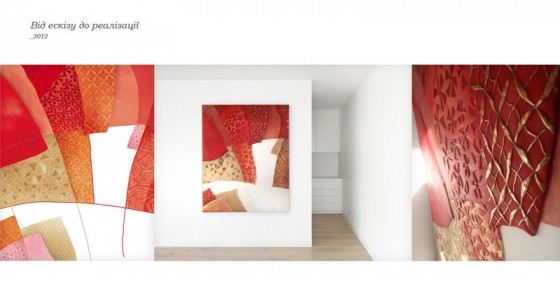 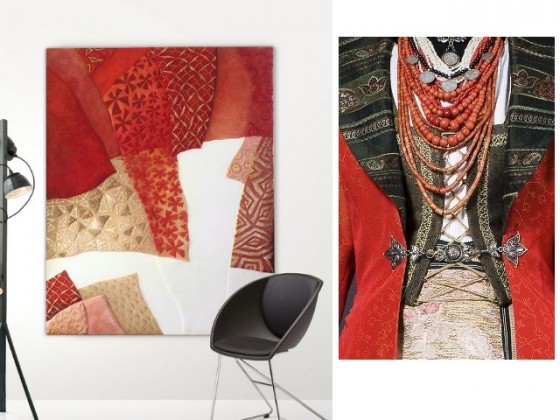 Photograph on the right – a fragment of a women’s costume from the “Noble clothes”: http://www.madein.ua

Graphic design studio of Yurko Gutsulyak has created a pillow with a photo-print of scattered hay. According to the author, “hay” in the design adds some eco-coloring to any modern interior. 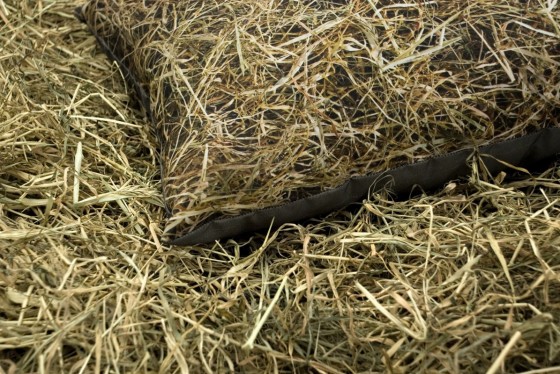 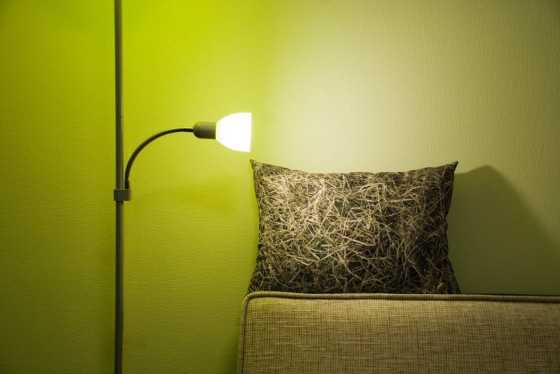 Dasha Styopcheva has decorated a showcase of the Kyiv shop “Involga” by an illustration. The theme of the illustration is an astonishingly ornamental forest with magic animals. 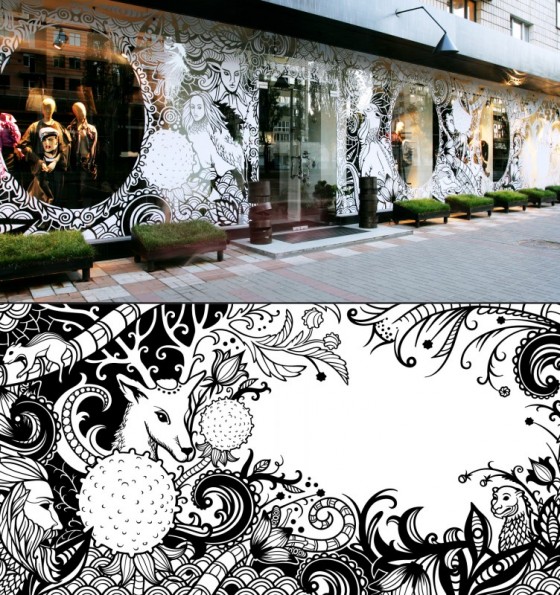 Andriy Bondar has designed a promotional booklet for the graphic design faculty. According to him, the basis for this was nature as the source of inspiration, search for creative ideas and divine and eternal images. In particular, a six-petal rose is clearly seen in the decoration of the booklet, and it’s one of the all-times famous shapes in decoration of girders, chests and other handiworks of folk art. 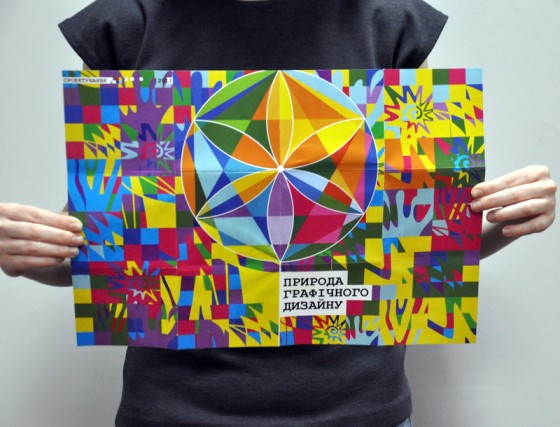 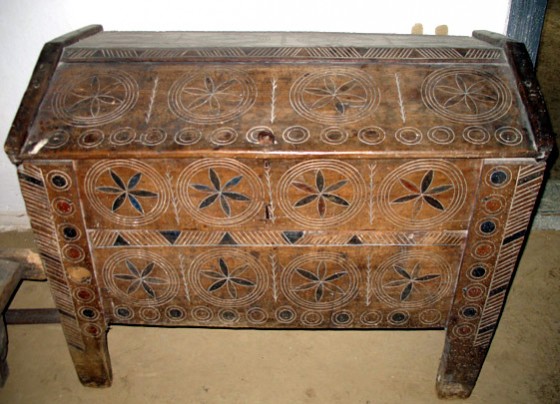 A chest, the photograph from http://yablog.org.ua

We also propose everyone to look through the materials about the potter’s house and a haystack-shaped hotel.