Serhiy Denysenko: Trypillya is Ukraine, I feel it 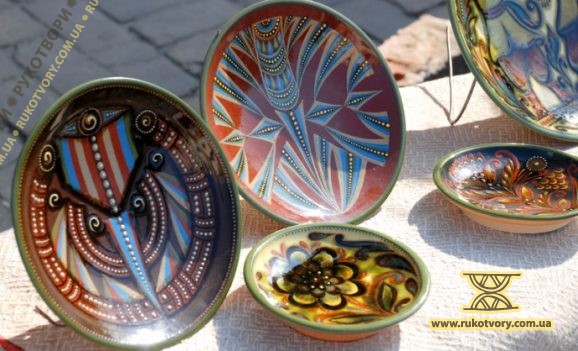 We saw the works of this artist way back at “Dream Country” festival but somehow at the time we didn’t come up to him. Second time we were lucky. Taking a walk along Andriyivsky Uzviz on the Independence Day we noticed familiar plates with painted ornaments in the traditional style. Prototypes of these ornaments were exhibited by women on special crockery shelves in their houses centuries back to decorate everyday home interior which usually wasn’t very rich. 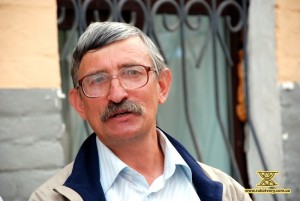 Serhiy Denysenko, an artist working with ceramics, from Vasylkiv

The author of the plates unknown to us  turned out to be a rather famous person and, besides, he was from a family rich in national traditions. Serhiy Denysenko is a cousin of a well-known potter Lesya Denysenko-Yeremenko the story about which has already been posted on Rukotvory. Together they descend from Denysenko family in which all the men as a rule have been potters by occupation, even back to the generations of the great-grandparents.

— In my workshop I have a pot made by my great-grandfather, one made by my grandfather and a lot of works of my father – Sergiy Denysenko says proudly. — So I have them in my sight every day. I can say we are in some internal contact with them.

But this descendant of Denysenko family has a connection not only to pottery but to Cossacks as well. From Sergiy’s story it turns out that by his grandmother’s line he descends from Cossacks. The evidence of this is the grandmother’s certificate which was given to her way back during the Tsar times and which says that she is “a Cossack Zhyshkun by name”. Even nowadays there are moments in the potter’s life when the blood of warrior descendants rises in him.

— My elder son studies in the Academy and is a bit interested in knighthood; he makes armor for his activities and not long ago he asked me: “Dad, could you try the armor on?” I did and found it very hard. When I put a helmet after this and took the shield in my hand the armour practically bent me down. But when I took the sword this feeling of weight went away and a wish to fight appeared instantly. My Cossack blood rose in me at once. And the potter’s blood is pulsing in me every day (laughs).

Sergiy has had this thirst for clay from his childhood. His outstanding talent for pottery became apparent in his early age. Now his son also takes interest in this sticky substance. 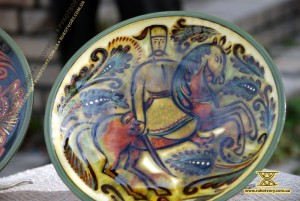 — I think that art is the destiny of our family. For instance, my elder son studies at present in the Academy for the Magister degree and makes etchings. But the most interesting thing is that he is starting to take interest in clay now. He says:”Dad, I’d like to go into pottery.” So, each person has his own destiny and everyone should only identify his own one.

Serhiy Denysenko started his artistic path at the former Vasylkiv Majolica-Ceramic Factory the prosperity of which fell to the 60-70th of the past century. The Chief Artist there was his father – Mykhaylo Denysenko. Eventually the father’s position was taken over by the son. At the factory he used to develop samples for everyday household things: bawls, cups, and mugs. With the aid of the Art Union they received orders for the production of landscape and interior plastic arts: decorated the Wedding Palaces and Palaces of Culture.

Vasylkiv Majolica-Ceramic Factory was founded as a pottery cooperative association way back in the 1928. At the time the potters were taxed upon and for everyone they started to turn into “kulaks”. So, to escape the situation the potters organized the cooperative art association. The same way the situation developed in Opishnya. As for the Vasylkiv, there always have been a lot of potters in its suburbs. At the end of 19 and at the beginning of the 20 century they numbered up to 150. At the time clay ceramics was in great demand and it was sold at the entire territory of the former Soviet Union.

— Nowadays nearly all the factories connected with ceramics (majolica, china) are closed. The conditions have formed such that energy carriers have gone up in prices but the technologies at the factories are all obsolete, so the expenses do not equal the sale. Some time ago crockery was cheap; each family could afford to buy it.

Closure of factories in the 90th affected a lot of artists. Some of them have changed their occupation, some are continuing with creative work but quite on their own. In spite of the decline of the ceramic manufacture branch in the country, a lot of artists working on their own were able to reveal their creative abilities and those natural inclinations which earlier had been buried deep inside during the time of their monotonous copying of the factory models. After Serhiy Denysenko, nowadays artists have unlimited possibilities for creative self-expression, and this enriches the ceramic art with new forms and tendencies. 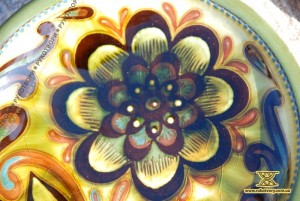 — Under such conditions artists do not have any frames limiting their creative work. It’s the artists who set them for themselves. Ceramics is so rich in technologies, forms and even genres that it is impossible to comprehend everything at once. Look here: there is pottery exclusively; there is decorative painted ceramics where one can paint both hand-made and molded pottery. The ornaments can be made in different ways: there are engobes  for decoration and the paints which can be applied both under and over the glaze. Purely technical possibilities in ceramic manufacture are extremely extensive. Ceramics has never been lagging behind.

The conversation with Serhiy Denysenko went easily. There was a feeling that this man had found himself and felt in his shoes. Sergiy creates things guided by his feelings which suggest to the artist everything starting from the color choice and up to the meaning of the images implied in the plates.  Below I produce a part of our talk without editing – with questions and answers.

— If to compare 19-20 centuries with modern life, what can be said about the variety of forms: is it increasing or, on the contrary, becomes poorer? In what way does the evolution go?

— I watch young potters (and they are many nowadays) and I like the fact that they start from the original sources and try not to deviate much from those models we had once. But they use quite new technologies; there are a lot of ways of decoration that in connection to the classic ways produce good results.

— What about the symbolic contents?

— Possibilities in the area of information are very wide now. We can find information from different art kinds and use it in practice during decoration. But one should be careful with this: there is a risk to go into eclecticism meaning to mix so much of everything together and get a kind of kitsch or medley. But if one has a pure national sense – and a true artist always has it – then one can permanently control oneself and differentiate between “own” and “alien”. For instance, oriental ornaments do not work on me, however beautiful they are. They do not touch me and my soul does not fall or live for them. And when I take a look at a Trypillya art (though they say it is possibly not entirely Ukraine) it penetrates through me instantly. And if I take such work in my hands I feel fantastic. I know for sure it is Ukraine. Because it has the corresponding spirit inside; it is communicated by some invisible ways. I should say that not only Trypillya civilization occupied large territory, but Ukraine as well.

— So, that means you verify everything with your feelings? 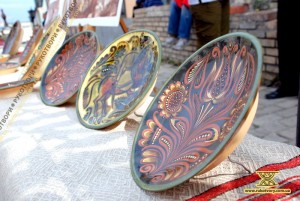 — Yes, with my feelings. And the most interesting moment is watching potters of other nationalities. They make quite different shapes and cannot do it Ukrainian way. They are able to make a copy of some work but anyway the shape will differ from the original one. I have noticed this fact. For instance once I observed a Tatar trying to make something Ukrainian. He managed in some small parts but anyway the shapes of his works were different because they were based on the oriental traditions. It is the same with the Ukrainians: when they start to copy something they cannot make it perfect. I would say that the inherited genes work in this one hundred per cent.

People from our Ukrainian Diaspora like to buy my plates very much because they feel I have real Ukraine. And they miss native. What is interesting – every Canadian or American of Ukrainian descent passing by me would necessarily come up to my works and thank me if not buy something. But in most cases they buy my works.

— Speaking about the symbolism: do you feel its influence on the level of the everyday life?

— In the past ceramics used to have ritual meaning among others and the ornaments had different symbolism. But nowadays no one is able to decipher those symbols. One can only feel them.

— So, feeling the positive influence of the symbolism…

— Really, it arouses a positive feeling, with a plus, not a minus sign.

— You have said you take the plots for your plates from pysankas and epic literature. Where else? 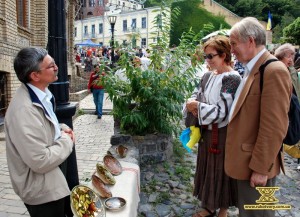 — In principle, it is quite enough, eventually creative imagination is adding to this. The main thing here is the sense of proportion. It happens I am busy with painting arranging colored and linear motives on the plate and on a certain stage something inside tells me: “Stop”. For instance, I’ve drawn a line and don’t want to put one more near it – I feel the work completed. And I continue on some other plate in other aspects while this one is ready. It’s the same as God created us the way we are but he is still working at us in some aspects – so His creative work continues (laughs). Everything here is built based on the intuition and sense of proportion. And the sense of proportion is one of the most important feelings each person should have.

— You have said you reproduce some of your father’s works…

Yes, with each batch I reproduce one or two of my father’s plates. I don’t have to do this because I have a lot of my own sketches but this way I keep him and his creative work in my memory. His portraits and works surround me everywhere. And each time it’s as if something tells me: “Make one work more, and one more”.

— Thus, it is as if your connection with you father is continuing: you feel his support and you father continues to create together with you…

— Absolutely. You know that is true. We do not have any idea about a lot of things but spiritual connections exist independently from us. It is only that we do not want to think about this.

— What do you feel when you are working at your items?

— When I ornament them I have a feeling of some inner comfort and peace. I already know what happiness is. One doesn’t have to explain much about it to me. It is creative work.