Olena Dziyadevych: I don’t stitch the ornaments, I knit them 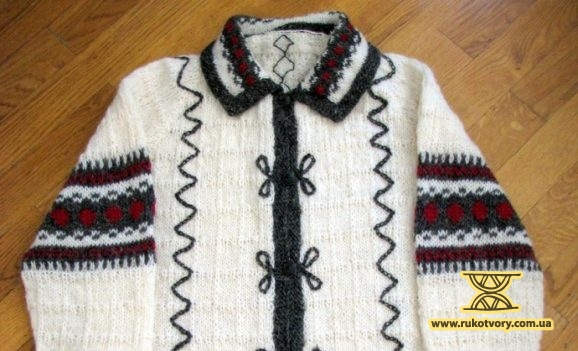 Knitting art has been known in Ukraine from the most ancient times. The technique based on making knots appeared back in the primitive society for creating different things necessary in everyday life, in particular – fishing nets. In the XІV – XVII centuries at the Western Ukrainian territories the knitting art and its kinds (drawn-thread work, makrame , needle knitting, crocheting, tatting ) existed as auxiliary crafts in workshops of hatters, belt-makers, rope makers. But in the end of ХІХ – third quarter of the ХХ century this kind of art acquires special dynamics, variety and originality, especially in the creation of national components of the household stuff by means of knitting and crocheting.

Thus, a Kyiv knitting craft specialist Olena Dziyadevych has become enthusiastic about artful knitting – not of a simple kind but that including ethnic ornaments. To get wool for sardaks  and keptars  she sets off for mini-expeditions to the Carpathians. From such rough woolen threads Gutsuls make lizhnycks  and verets . In accordance with a local custom the threads are usually left for a day or two in a mountain stream pressed by a stone. After this kind of washing wool which by itself doesn’t wear out easily absorbs powerful water energy…

— Do you make any drafts before you begin working? 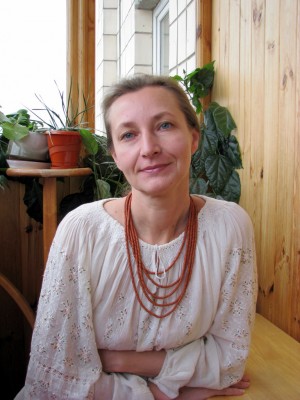 — I make sketches. All things have regional ornaments – Gutsul, Podillya. The clients are not always interested in regional peculiarities if the things fit. At present we follow the fashion and this fashion falls short of the clothes that our ancestors wore.

It happens you spend some time making a thing, make it in imitation of an application or embroidery and in the end you get something quite unexpected. Each thing has its own character, the same as with a child, saying: here, you’ve conceived me your way but you should love me now the way I am!.. My children wear men’s sardaks for four years and after this one can wash them, hang on a line to dry and then sell as new. Knitted fabric hardly ever goes out of fashion and young people like it. I want all the things to have some national symbols or guarding signs on them.

— What symbols do you use in the ornaments?

— Most often I make floral ornaments. I scrutinize manuals, albums of national Ukrainian costumes and try to reproduce after the pictures the ornaments that ancient masters used to create in the old times. I choose ornaments not of some particular regions but those I personally like.

— Do you adapt the ornaments for knitting and make any simplifications after having chosen them?

— It is impossible to reconstruct ornaments stitch by stitch. That is why I simplify them.  Let’s take, for instance, an ornament made of triangles. When I knit the triangles with their vertexes down it’s a women’s sign; with the vertexes up it’s a men’s sign. I pay attention to such details for my things not to be contradictory and not to provoke sly grins of the connoisseurs of signs and symbols.

— What are the fundamental differences between men’s and women’s sardacks and keptars in your making? 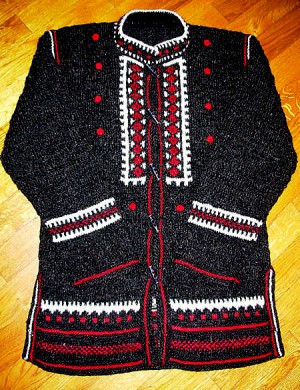 — First, they are in the colors. For men the colors are darker though there are a lot of women who like black and white. Also the fasteners are located on different sides. I ornament women’s clothes with wavy and rounded lines, and men’s clothes with pointed broken ones.

— Do you make ornaments yourself?

— When I start working with a new model and look through different albums I choose from those ornaments which were usually used on shirts and chemises. It is because more coarse fabrics for svytkas  and kozhukhs  were ornamented with applications, thin cord and the like. It happens ornaments look very nice but when they are knitted they make a kind of chaos. In such cases I change something in the pattern or invent something myself.

— Do you also make light summer and spring clothes?

— I knit and crochet well. For summer clothes extremely thin needles are needed. This kind of work is very laborious. It is comfortable to knit only using knitting machines. On a machine, one can make a man’s overcoat of a large size within a month. The most expensive coats cost 2000 UAH. But how can I charge 2000 UAH for a chemise which required the same period of time to be made? Anyway it will wear out faster, and besides people won’t buy it for this sum. So such things I usually make for myself or for presents. But in general I’ve knitted a lot of “society” things.

— Could you tell us about the color palette of your things?

— It is a traditional one. Naturally, I don’t dye the threads by birch leaves or onion husk, but I select the shades which natural dyes would produce. There should be two or three, maximum four colors in an article of clothing made for an adult.  Things for children are more colorful.

— Do you make collections or work with individual orders?

— It can be said I make collections when there are several items of clothing made in the same color palette. I work by the orders more seldom. Majority of people want to try things, to examine them closely. If a person likes a thing he buys it. And the order implies certain risk: the artist feels obliged if something doesn’t fit or doesn’t suit the person for whom it is made.

— What are the prices for your creations? 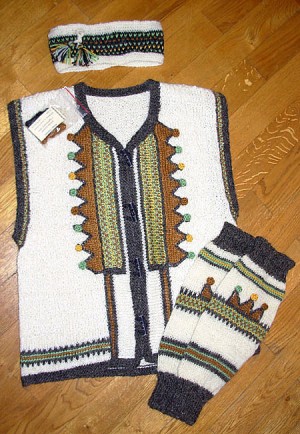 — Head-dresses in the form of a bandage cost 40 UAH, mittens – 60 UAH, children’s costumes cost 250-500 UAH. Prices of large things depend on their sizes and ornaments. Any large thing requires more than a month’s work. I buy wool and add cotton or flax to woolen threads for the ready items to keep their forms. Each purchase gives me energy and new ideas.

— What kinds of people are your clients?

— Mainly they are people who create something themselves. I was ordered items for the children of Oleg Skrypka; I once presented a keptar of mine to Evgen Kondratyuk for his 80th anniversary. Often masters buy things at fairs. During one of Kyiv Days a woman came up to me dressed in knitted clothes from head to foot. She said: “I am able to do everything but I want to buy something from you”. So she bought a beret.

— What is your working time schedule?

— In the morning I see the members of my family to school and work and sit down to work. I make breaks, cook and work till evening. And at the times when I come close to finishing a thing I feel a kind of strong drive: I can work for 14 hours without a break! It’s only when I get sick I don’t let myself work for bad energy not to pass into the thing.

— Have you ever been bored with knitting?

— Maybe I was at the time when it wasn’t creative work but just a means of additional earning… Once a colonel from an aviation college told me: “If a work does not advance, it is not your fault – this fork is intended for a bad person. You can test people this way. For good people work goes on very quickly.”

— Do you think that entirely hand made products should be sold by their creators or it is possible to sell them in shops? Will this change anything significantly? 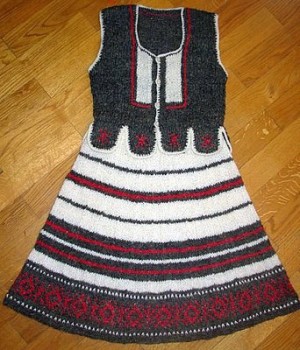 — If to sell such things in shops the artists would have more possibilities to earn, because the artists cannot stay at fairs every day.  Some time ago there used to be art salons, nearly all of them have disappeared nowadays. From the other hand, there is also an issue of communication between the client and the artist: when you buy a thing it comes to life for you. When visiting different exhibitions I always look at the sellers –then I feel their things are complete for me.

Olena Dziyadevych has been knitting and crocheting from childhood. She learned needlework without assistance. For 23 years she was working as a bibliographer in the Scientific Library of the Aviation College; she studied to get a “Tourism” speciality, and later became interested in the artistic knitting. By now she’s been in this art for nearly four years: she creates items, offers them at the Andriyivsky Uzviz and at the fairs held in the Pyrohiv Museum.

You can see more knitted ware at the personal site of the artist by the following address: http://wool.kiev.ua/