Natalia Svyrydyuk: clothes dyed by herbs is luxury even for dolls 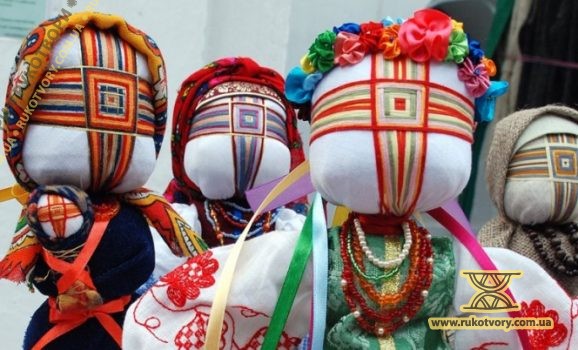 42-year old Poltava native Natalia Svyrydyuk creates knot dolls from flax fabric dyed in accordance with ancient technologies – by natural dyes. Ancient dyeing recipes Natalia has obtained from the artists of Reshetyliv factory of art products situated in Poltava region. Though in practice these artists have been using modern dyes in the production process for a long time by now, they are also familiar with half-forgotten techniques. 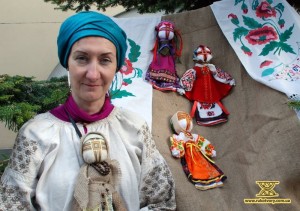 — Nice pink color is obtained from dyeing madder; celandine gives attractive yellow-greenish color. Peel of ordinary bulb onion (depending of the exposure time) produces brown color of different shades. As for the special Crimean kind of bulb onions which have violet peels, they produce blue-violet color. And then there is a play with half-tints, for example, green color obtained from knot-grass differs from that produced by madder. 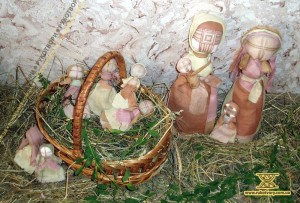 Women fix necessary colors by salt or vinegar. Sometimes the first try can be a failure – complains the artist. Because it happens I miscalculate something or add a wrong amount of some stuff. But at the same time the process is very interesting because the resulting colors are very beautiful, soft and go together well. Natalia has been conducting research of dying art for only a year that is why she is still doing everything in accordance with recipes.

— Some herbs require cutting to small pieces and a day’s conditioning afterwards. Some of them require boiling right after being pounded. Some herbs need drying first – to be boiled dry. But, for instance, celandine and green “hedgehog” chestnut skins should be cut fresh and instantly boiled in water. As for the chestnuts, they should be cut and left for some time. Only after this they can be boiled. I have already collected a lot of recipes which I haven’t tried yet. I dye fabrics and make dolls from them but I also pull out the treads from these fabrics to make crosses on doll’s faces where they are required.

In the process of working with natural dyes the person should not be disturbed or distracted by anyone because the process is complicated, it requires concentration and quiet. In addition, a lady-“cook” of this kind to much degree looks like a magician – Natalya says – because in her kitchen everything is boiling and seething and she is constantly stirring this or that solution.

— I ask my relatives out of the kitchen because I have vinegar and salt there; I’m constantly moving because it takes adding water here or filling something up there. There are a lot of different bowls, a sieve, and pieces of gauze. For example sometimes I have to sieve the boiled solution down leaving the herb cake, then cover it with water and boil again. And afterwards I pour both obtained solutions together. Because of all these actions the process looks as if I am practicing sorcery. But any cooking woman can be said practicing sorcery. However, all this magic is of a good kind because it is for beauty and preserving of traditions. 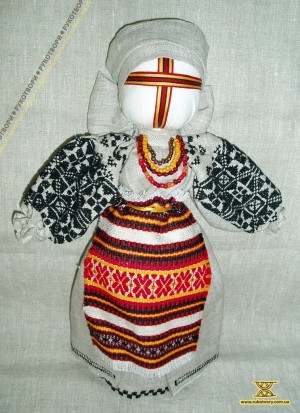 Ornaments from Olena Pchilka’s collection used in the chemise decoration

To wear clothes made from fabrics dyed with natural dyes has not fallen to the lot of our generation because it is too labor consuming and is not cost-saving in any way. But to dye fabrics for dolls means to maintain the tradition – the artist says. It is also easy to awake interest in the children in this kind of chemistry and, besides, everyone is able to do this at home in an ordinary kitchen.

— For people who live abroad dolls of this kind look native because they really are a piece of nature and the juice of the Motherland that grew the plant which later gave its color to the woman as the protector of the family. One of my dolls is in the Stepan Bandera’s family collection in Germany. So they took there a doll made from the fabric dyed by natural herb dyes.

Natalia Svyrydyk creates other kinds of dolls, too. Each of them has its own original story. For instance, the artist has a collection of knot-dolls the clothes of which are ornamented by embroidery and national patterns. These patterns were collected by Ukrainian classics Olena Pchilka and Marko Grushevsky at their time.

By the calculation of some journalist, Natalya Svyrydyk has already created up to a thousand dolls from fabrics – both knot-dolls and motankas . But all this beauty may have never appeared if in 2004 Natalia didn’t leave her work as a library specialist for doll-making. Since then, creation of traditional national dolls has been the main occupation of the artist. She says that if to treat the work with dolls seriously it is possible to make a living by it. In any case it is worth trying to earn the amount not less than of the former payment. 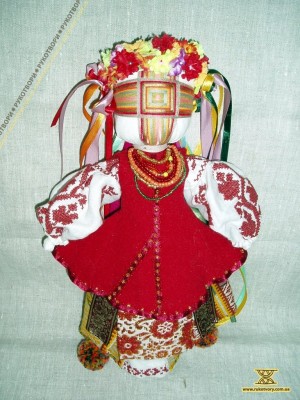 Pattern of the chemise from Mark Grushevsky’s collection

— It does give a profit, though not very high. And now, if the payment of library specialists is increased by 50 or 100%, I will hardly earn more. But in any case, I will not give this work up because I get a lot of satisfaction from it and I live for it, too.

What is interesting, a former library specialist took interest in this kind of national art quite by chance. Once, a book by a famous Ukrainian researcher Olexandr Naydyonov called “Ukrainian national doll” fell into her hands. Natalya saw a familiar sight of a knot-doll on the illustrated cover of the book: her grandmother used to make her a similar kind of dolls in her childhood.

— So, I recalled it only after more than 30 years thanks to the Olexander Naydyonov’s book. At the same time in my life I was going through a very difficult moral situation, I even had to leave my job. I understood at the time that I needed to get occupied in some kind of art to rehabilitate myself psychologically. And because I’ve been drawing, painting and embroidering all my life, this doll-making was a new occupation but based on what I already knew. I started to read a lot, to go deep into the costume history and ethnography – everything helping me in creating the dolls.

Beside clients at festivals and fairs the artist is supported by state institutions. Poltava state administration and city council buy her dolls and help her with publishing brochures and other materials. 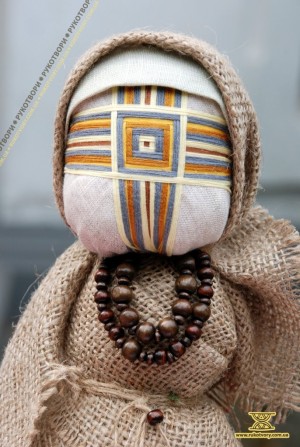 One of Natalia Svyrydyuk’s knot dolls

— When I began working with dolls it was as if they spread a protective cover over me. I started to come across a great number of positive people who helped me absolutely free only because of my occupation with dolls. I feel that the doll protects me. Certainly we all feel unwell or have problems at times, but in the global scope and especially in my creative art I feel the doll supporting me and even guiding. It never happens that I go to a festival and is not satisfied with it: even if I don’t make any money I always meet interesting people.

People say and it is written in books, too, that a hand-made doll is really a guardian talisman. Especially some time ago, each woman used to grow hemp or flax herself, process it in a certain way, make fabric, embroider it, and make a chemise from it, this chemise absorbed all the human energy. So when the woman grew old and her chemise wore out it was cut to pieces from which motankas were made for her grandchildren. Such a chemise contained a lot of positive energy and together with it the history of the family and the kin was inherited from these chemise pieces. This is national pedagogic.

Beside all this, by the scientific evidence, the roots of the doll lie in the great antiquity, at least in the Trypillya times, for sure. The cross on its face has represented a solar sign from the ancient times; a sign of sun and fire which is considered to be the most ancient of the human signs. Such a doll used to be the family protector and the mother of all the gods – the chief goddess giving life and death and giving birth to the Sun. And not only to a child she gave the birth but to all living beings as well. Such figures used to be made of clay, stone or bone. Each of them had a wavy line carved along the bottom as a sign of water. For thousands of years the doll has been a part of the everyday life of people.