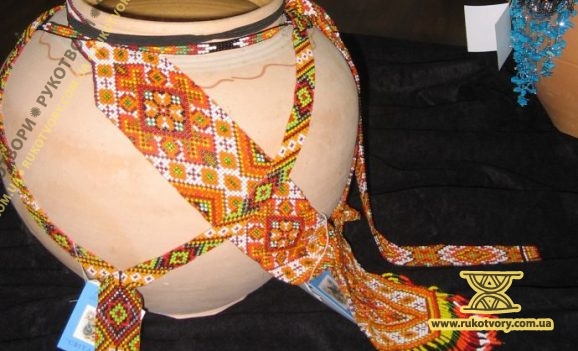 We met with the master at the beginning of March at the opening of her personal exhibition in “Svitlytsya” gallery (Kyiv). Lady Mariah brought there her extensive collection of decorations made of colored beads.

– Where do you take inspiration for such artistic bead compositions?

– I was born in a mountain village called Prokurava, in Kosiv region. The beauty of the mountains, forest and fields in those parts give rise to inspiration. It’s my gift from God that at the age of 5 I was able to embroider with cross-stitch. Later when I was 12-13 years of age I made pysankas never ever having studied that art. I can even show you some because I have pysankas from our Carpathians. They are real whole eggs.

The master takes an ornamented egg from her bag. She shows it to me asking me to hold it carefully because it can be broken.

– When did you start working with beads?

– I’ve known about beads from my childhood, too. But I started bead weaving when I got ill. It was very difficult for me to stay inside doing nothing so I began working with beads, to make these syllyankas (collar necklaces), gerdans (necklaces in the shapes of narrow stripes). I remembered I had seen them on girls. Although how many girls could there be having such gerdans – one or two, actually. So I started to find different ornaments in magazines and to combine them myself. 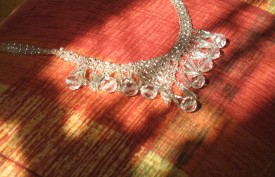 I had my first exhibition in Kolomya museum in Gutsul region in 1991 because in 1992 I already was a member of the Ukrainian National Union of folk art masters. I remember people came from the Union from Kyiv to see my exhibition and later they told the museum director: “You should make photographs and go to the Union; you will be accepted if they decide you are worthy”. I did that and since then I have been a Union member.

So at present beads is my main occupation because earlier I was into different crafts: I used to embroider and to weave on the loom such things as zapaskas (national overskirts), TV covers and rushnyks; but at present my age does not allow for my working on the loom so I am occupied only in bead weaving. I have orders. As for those things you see on the stands they are not sold in case I am invited to some other exhibitions, for me to have something to show. Because if I sell them it will take me quite a time to create new ones.

– How much time do you need to complete a bead decoration?

– It depends on each particular handiwork: if it is very large it can take me two weeks to complete it; if it is a small sylllyanka the kind I am going to present you now with then it is possible to complete it in a day.

Lady Mariah opened her bag again, took out a necklace made of white beads and smiling presented it to me for remembrance. I thanked her for the present and we continued talking…

— But my working day lasts from 4 in the morning till 8 p. m. I am not able to work any longer because I get very much tired.

– How do you start your mornings?

– I get up at three thirty; even at three in the morning sometimes. I start my day with washing and a prayer. Then I make coffee, drink it and sit down to work.

– What are you thinking about when working with beads?

– You know, when I work with beads I am not thinking of anything. First I draw an ornament as if intended for cross-stitch in my sketch book. I look at it and see whether the colors match. And only afterwards I try to understand the way it will look. Speaking in general, I do not have a habit to think ill about someone. I just wish happiness to each person who will buy any particular handiwork. The handiworks of this kind will later be worn by someone, so it does not do getting angry or thinking ill about anyone in order not to pass this bad energy to the people who will wear them. 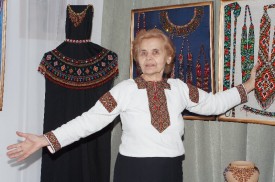 – Does this exhibition represent the result of work for some period of time?

– Well, a part of these exhibits were shown earlier. For example, that large cryza (a wide multicolored bead collar covering breast and shoulders, fastened from behind – auth) was shown in Ivan Gonchar museum yet back in 1998. I keep such exhibition items; I do not sell them because they need a lot of work. That is why I try to leave such exhibition works for myself and if someone wants to buy any of them I can make an identical one for the person.

– How often are your handiworks ordered? What do people want more often?

– Once a woman ordered a cryza from me; a black one, similar to that at the exhibition only a bit narrower. She said she would wear it on a dress. She was from Lviv. So, I made such a cryza for her.

I also made a cryza for a pavilion in Ivano-Frankivsk, because it happened I completely run out of money. I made a cryza similar to the red one that you can see in that corner. I brought it to the clients and they said: “It’s very beautiful. How much is it?”. “A three hundred UAH” I answered them because I considered they would add an extra charge anyway. So they set it out at once at the cost of 450 UAH and called me soon afterwards: “Come for your money because your cryza is already sold”. Well, they’ve taken their 150 UAH extra for this. And I cannot do anything about such things because when I need money I sell at the prices I am able to set.

At present beads have risen in price a bit, so the bead handiworks need to be more expensive. 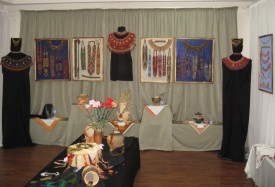 – What is the average price of a handiwork?

– It depends. Some of them cost 50 UAH, but some of them cost 300 or even 500 UAH. As for the gerdans the kind you saw I sell them for 1.500 UAH; it is not profitable when cheaper: it takes me a month to complete. And one should include the price of the used beads into the cost.

– How much do beads cost you?

– They cost me pretty dear, 25 USD for a kilogram. I get beads from Czech Republic. Shops in our country offer beads, too, but they are even more expensive. In Kyiv they can be bought at Leo Tolstoy (underground station area – auth) but they are a bit more expensive yet.

As for Ukrainian beads they don’t exist. In Ukraine they have never been produced. As for Czech Republic, the bead production started back in the 16th century. There are Japanese beads as well, and very beautiful, too, but their shapes are different and they are not suited for gerdans. Also, these beads are pearly.

There are also Chinese beads; they are of poor quality and cheap. China has started their mass production and sells them cheap but the works from such beads have no quality at all. I bought them only once and later gave out to someone.

– I know that beads got to Ukraine in the XIX century…

– Yes, it’s true, and since then people have started to decorate themselves by them. Men used to wear hanging decorations on their watches and caps. Even now they do it. There are special Gutsul caps with symbols embroidered with beads. 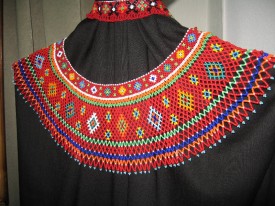 – What symbols do you use in your handiworks?

– You know, they say the bead weaving on its own is protecting. As for symbols, you know people invent much nowadays. I do not believe in this much but I know that if a person makes something with sincere and kind heart, then people who will later wear this handiwork will feel good.

When I am in a low mood I will never start working because this energy can pass to the person who will buy the work. I’ve heard this from elderly people.

– With what colors do you usually work?

– Most of all I like to work with our mountain colors. If I make a shirt I’d like to have all the traditional colors in it. But more often I weave using two or three colors for city ladies. Because, for instance, if a person wears some green dress then red with blue will not match it. But if I make a thing using two or three colors the decoration will match the costume. Black with grey and black with silver will both look nice.

– Are there any people with whom you are sharing your knowledge and skills?

– My granddaughter and my daughter both can weave. There are a lot of people who can but they do not want to make works of good quality. They buy these Chinese beads but they are no good, it is not possible to make any good work from it. But people make things for selling, anyway. They make them cheap and sell them cheap.

– Is there anything you haven’t made yet but would like to make?

– There are a lot of items I haven’t managed to complete by this exhibition but I will make them in future.