Larysa Golovnya: I ornament pysankas within the period between Candlemas day and Whitsunday 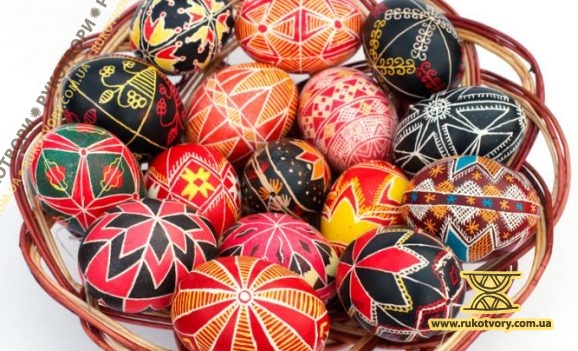 Larysa is a pysankar from Kyiv. She learned to ornament pysankas together with her younger son Olexiy. It was back in the 90th of the last century. At present, her son is a grown-up person and does not ornament pysankas any more. But as for his mother, she grew very fond of this occupation and she is now teaching children the pysanka ornamenting art. Last time, too, Larysa Golovnya taught all the willing people to ornament eggs in Ivan Gonchar museum during master-classes in folk arts.

— I’ve been ornamenting pysankas starting from 1996. It began when I went to an exhibition with my son. We liked it and my child said as he always does: “Mom, let’s buy a pysachok, a booklet and paints. Let’s buy everything.” We bought these things from Zoya Stashuk who at the time was exhibiting her personal collection in the Nature House. We came home and tried to make something. Because at the time I was already working in the museum (Ivan Gonchar museum – auth) I was learning to ornament pysankas copying the collection of Ivan Gonchar, by and by reproducing the entire collection. Having completed it in 1996–97 I grew very fond of ornamenting pysankas and since then I’ve been ornamenting them with my friends and acquaintances each year before the Easter. Also, starting from 2005 I’ve started to teach children to ornament pysankas in our Svitlytsya. 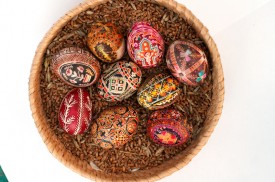 Do you ornament pysankas during the entire year of only the period preceding the Easter?

– Usually, pysankas are ornamented starting from Candlemas day and till Whitsunday. And you know, the wish to ornament pysankas comes exactly during this period and after the Whitsunday some relief comes upon me and the wish to make pysankas passes away. Though we start teaching children from October we consider it just learning; as for pysanka creation it starts strictly after Candlemas day.

– Where do you usually ornament pysankas – at home or in the museum?

– I make them at home. But at present I am more occupied in teaching because I think it is better if I teach children because they will ornament many more pysankas than I am able to do. Moreover: not only children come to the lessons, but their parents and grandmothers as well. They sit down and ornament pysankas willingly.

– Have you ever counted how many pysankas you have created?

– No, I haven’t done this because I present most of them to people and it sometimes happens I get orders for them.

– I know that you also embroider shirts…

– Yes, after Whitsunday I embroider till approximately the New Year’s Eve and afterwards I start ornamenting pysankas. I’ve been embroidering since 1994. I completed three-month classes in embroidery. And luckily they were teaching exactly traditional Ukrainian embroidery.

– So it was not cross-stitch…

– No, it wasn’t. I was learning different kinds of stitches. At the time a friend of mine was working at a History museum and she used to bring shirts for restoration, so it was there that I saw a long and beautiful women’s shirt and wanted very much to have an identical one. That shirt was from Chernihiv region, it was embroidered using white thread on white background with open-work at the hems. I embroidered such a shirt in 1994, and it is my favorite and my best one. 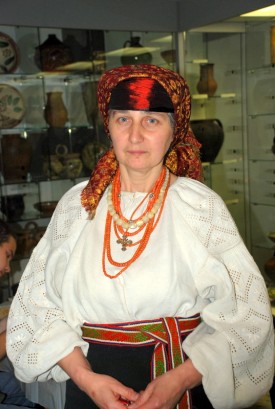 A little girl with her mother came up to lady Larysa.
– You see what nice girls come here – the pysankar said. For instance, Romana with her mother has been ornamenting pysankas for the second year and these pysankas are so beautiful!
– Well, Romano, is your pysanka with churches somewhere far away? – the pysankar addresses the girl. Will you show me what pysanka you’ve made today?
The girl takes out a neatly ornamented pysanka and extends it to us proudly. We continue our talk a minute later.

– You haven’t organized an exhibition of the shirts yet?

– I had a personal exhibition of embroidery and pysankas in Ivan Gonchar museum in Kyiv in 2008.

– How many shirts have you embroidered?

– Well, some of my works were not presented at the exhibition but there were their photos. So, I’ve summed everything up and I appear to have made about forty works.

– Is it possible to buy your shits anywhere?

– No, no, no. I embroider very slowly. It took me a year to complete that first one because I don’t have a possibility to devote much time to this occupation. It can be compared to a hobby because I have a direct work and three children. And though they are adults already I remain a mother and a grandmother for a while now.

– How long does it basically take you to embroider a children’s shirt?

– Well, they each take a month; they cannot be completed any quicker.