Ivan Honchar: We have a Ukrainian refrigerator of our own kind… made of clay 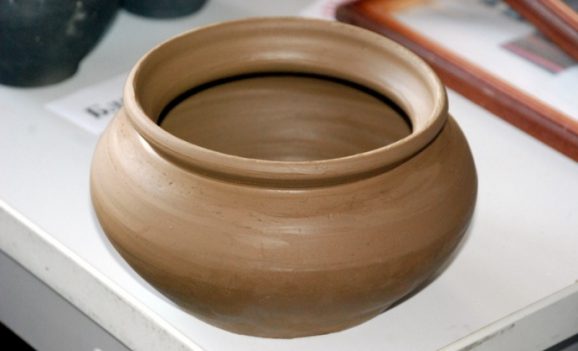 Ivan Honchar from Kobolchyn, Sokyryany district of Chernivtsy region, does not wear his family name for nothing. Besides the fact that he is a crafty potter by his ancestry, he is also the head of the regional pottery museum which he actually organized by himself. We met with the master at the All-Ukrainian exhibition called “Ukrainian souvenir – 2010”, organized in Novermber of this year (2010) in the Ukrainian House in Kyiv.

God was the first potter. He modeled a man from clay. Then pottery started to develop.

During the ancient times it’s women who were the first potters. Men joined them later. We know from history that men were more into hunting animals. As for women they used to stay at home and practice pottery.

In my village, there were 257 potters before and after the Second World War. Eventually people joined collective farms. It was not possible for potters to work in the collective farms during day and at home in the evenings because it’s very exhaustive physically. Due to that, pottery gradually declined. At present, about five potters work in my village.

I am from a potters’ family; my father and my brothers used to be occupied in pottery. My present task is to revive pottery: to teach children and grown-ups, to show people that this craft is necessary. 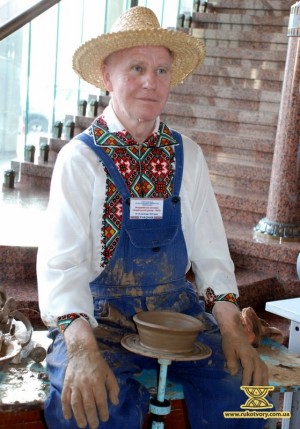 My another task was to create a large pottery museum. I completed this; I organized a Regional pottery museum in Kobalchyn, Chernivtsy region – the only one on Bukovyna. I can say that this museum is the only one of its kind in Ukraine. In the museum, there are ancient handiworks of the crafted potters, their potter’s wheels, instruments, potter’s knives, and bowls for stirring glaze or engobes. There are also a lot of portraits of potters who lived and worked once and who now serve as examples for present generations. At present, I teach grandchildren and great grandchildren of crafted potters. It’s in their blood.

I lead a club in the pottery museum. In it, there are ten children. I am able to teach more but it’s not possible because of the constant lack of time. You know, I am the leader of the local folk choir. Besides, we have a weaving club in our museum.

I tried to work with clay yet back in my childhood, at the age of eight approximately. Later I went to school, afterwards graduated from musical and pedagogical college and an institute of physical culture. For 25 years I worked as a teacher of music, labor and art lessons.

I became seriously occupied in pottery when I retired. I am already 71 year old but clay keeps me alive. I am told I do not look my age but it’s because of the clay which helps me to keep fit; I am constantly moving because we keep searching for clay, digging it, stirring and shaving it.

Clay can be called a God’s gift for people. We walk over money. It only takes the skills of transforming clay into a pot or a souvenir and then of selling the handiworks.

All my family eat from earthenware crockery. Why did our parents and grandparents use to be healthy and have strong teeth? It was because they used to have meals form clay dishes using wooden spoons and used to sleep on beds organized on special clay furnaces. They walked around barefoot and had connections with the nature and universe. At present a lot of people have realized these facts and are returning to ecologically clean pottery from aluminum pots.

Clay can be eaten and drunk. It has all components necessary for living organisms.

Clay is used everywhere, even in aviation and space technologies. I heard that Japanese people even used clay in motors once. 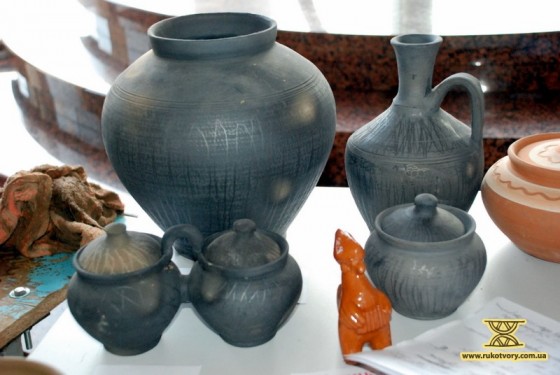 I visit fairs in Pirohiv, Chernivtsy, Poltava, Opishnya. Last year I visited Romania four times. Handiworks from natural clay are of high value there, too. I also have a lot of orders. For instance, at present I am working at an order of a restaurant in Kamyanets-Podilsky. They want to serve dishes using exclusively original pottery. 24 titles of crockery: salad bowls and crockery for different dishes.

In earthenware crockery food stays fresh longer. People at the fairs buy mostly pots, especially such things as makitras for stirring poppy seed, pots for chinakha (a kind of roast meat), for borsch.

Once people used to carry water in ban’kas of this kind (right upper handiwork in the picture – auth.) A ban’ka was covered by a husked corn ear. People used to dig a small hole in the earth and put it inside covering it with soil: the water in such ban’kas stayed cold for the entire day. Our ban’ka is also called “a Ukrainian refrigerator”.

For milk, people used to make jugs with a “navel”. A special jut was made in the middle of it. They said it was good for sour cream. Ladies used to make special orders for them.

My father did it the following way and I learned it from him: when sitting down to work with clay or the potter’s wheel one needs to cross his heart, to make the sign of the cross over everything around him and say: “Help me, good Lord, to work through the day with good results”. And God always helps.

To become a potter one needs only a wish. As for the love, it can appear later, in the process of work.

Clay a kind of draws people in strongly. Sometimes I work so intensely that I don’t want to stop for meals.

I can make as much as 100 – 120 pots per day. Manufacturing of one pot takes about a minute or a minute and a half; besides, there are electrically driven potter’s wheels. With them, potters do not have to think about anything, they simply work in an automatic manner. You see now, I am talking to you and my hands keep working. A skilled potter invents shapes for his items in the process without any sketches. 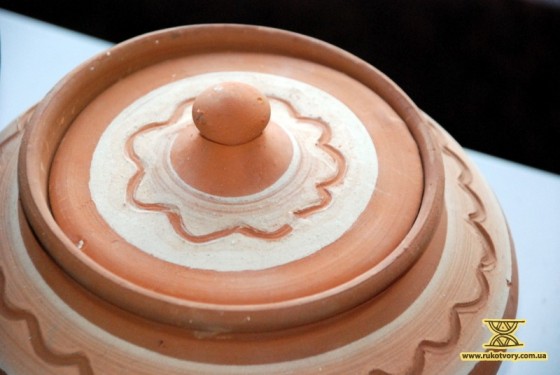 I work within the local tradition. I have to complete an extensive task – to revive black-smoked ceramics, to teach children to make it and to build furnaces.

I take part in different projects and hope for winning some money some day. Everything rests on the lack of financing. The state should support us. I shouldn’t shave clay manually at my age of 70; I should have some support to buy an automatic device, a pug-mill or a vacuum press, then I will be able to work quicker. Only talking about development is no good. A potter cannot afford to buy everything by himself because a press alone costs over 50 thousand UAH. It’s for a large one; a smaller press is about 20 thousand UAH. These devices used to be manufactured by Slovyansk city but now the plant is destroyed same as lots of other enterprises. As for abroad, such tools are manufactured in Germany, France, Austria and Japan.

I wish I had a Japanese potter’s wheel – it’s wonderful like a doll or a fairy tale. It has a drive, certainly, but we need to show this to people, we need to develop. I would place an electric wheel beside a foot-operated one and would show how to work on both of them. But an electric wheel costs about two thousand USD. Where would a potter get such a sum from? It takes for some businessman, for rich people who operate billions to say: let’s donate for this man the sum he needs. Let him buy the required devices and continue to teach children and to show the art to people.

I wrote letters to Y. Timoshenko and V. Yanukovych at the time when he was the Prime Minister. Actually, I wrote to a lot of different places and got no replies. All the replies came to the local executive bodies. It’s good that Vasyl Kozak, the state administration head, responds to any questions and helps people. It’s due to him that we’ve created our museum.

Text and photographs by Kateryna Kachur