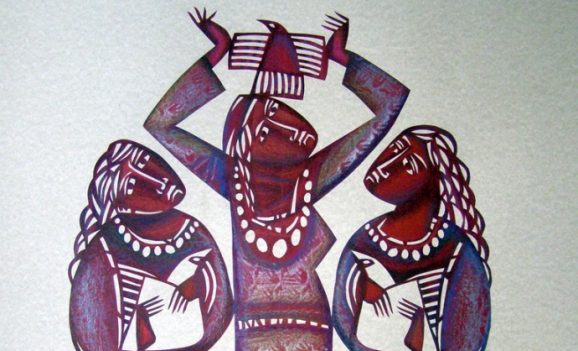 Note: Vytynanka is a kind of Ukrainian decorative art that has deep and rich traditions. Vytynankas are anecdotal and ornamental decorations of houses, delicately or in a silhouette way cut out with knives or scissors from white or colored paper. They were used for decorations of walls, windows, shelves, stoves, furnaces and fireplaces.

Lace flowers, trees, birds, animals, cossacks and girls cut out of colored or white paper, as well as all kinds of other different  anecdotal and rich in contents images have always decorated houses starting from the ancient times:  stoves, windows, joists, places of holy icons, dish shelves and walls. They have served as decorative and guardian attributes. First paper vytynankas (originating from the verb “vytynaty” meaning to cut out) appeared in Ukraine in the 19th century and they were most widely spread in Podillya, Dnipro regions and territory adjacent to the Carpathians.

Well-known in Ukraine and beyond its boundaries graphical artist, creator of vytynankas and pysankar Andriy Pushkaryov is discussing the level of  the vytynanka development in Ukraine and the peculiarities of this art.

— Pysanka is already fully advertised as a Ukrainian brand and as for vytynanka this advertising work is still ahead. Though at present it has become known that vytynanka is an ancient Scythian art in which the ornaments were cut out of animal leather then this leather was imposed on another piece of leather and the cut out pieces were burned out by the stones from the hearth. So this can be considered as the first vytynanka prototypes. 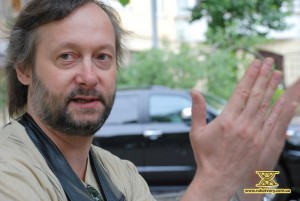 Later, when paper appeared in China in 9th century, people started to make paper vytynankas all over the world. In particular, vytynankas were also made by Albreht Durer (German painter, graphic artist, engraver, mathematician and art theoretic in XV-XVI — auth.), Peter Rubens (Flemish painter, one of the most famous representatives of baroque epoch, XVI-XVII — auth.), our countryman Geogry Narbut (famous Ukrainian and Russian graphic artist, XIX-XX — auth.). As for the term “vytynanka”, it appeared somewhere in 1913, originating from the word “tynaty” meaning “to cut”. Such cutting is of a symmetric kind. Paper is folder twice or several more times for this. And the word “vytynannya” means asymmetric cutting.

In general, double symmetry is the nature of Ukrainian vytynankas. Here, for example, pots- twins that are usually presented to newly-wed couple are famous. Main dishes were taken to the workers to the field in these pots, too. Though they are not totally symmetric because enamel cannot be completely symmetric, there are some specific features in this. That is why I always make a kind of asymmetry in symmetric vytynankas.

– When did you get acquainted with vytynankas first?

– First I saw vytynankas at my teacher’s – Evgen Leshchenko from Krivy Rig. He was skilfully laying out butterflies. By the way, in Chuan Huan – a Chinese culture – such small butterflies were cut out and placed by the window perimeter, and in Ukraine people always ornamented their houses, stoves, the space between the windows and rooms. 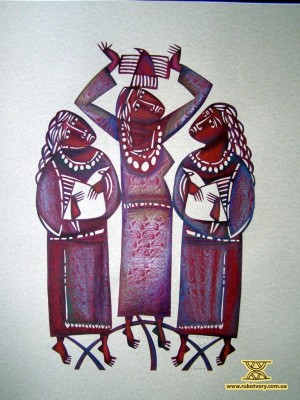 When I moved to Dniepropetrovsk, I got ill and was not able to come to the workshop. So I took scissors and started cutting. Usually everyone starts from making snowflakes with which New Year trees are decorated. In the 80th I took great interest in Petrykivka vytynanka in which paper elements of different colors are used. But later I rejected this method because with it I was dependent upon the colors of factory-made paper. Then I took western Ukrainian vytynanka, vytynanka from Mohyliv-Podilsk, Halych as a basis – from one-piece sheet of paper. But I didn’t reject the colors. I just paint everything myself.

– What do you paint them with?

– I extract oil from oil paint by paper or blotter of the kind we had during soviet times, for the color to become similar to pigment, and then on the basis of degreased turpentine I make the colors I need. In the end I fix everything by fixatives so that it doesn’t stick.

– Last year there was a good symposium in Mohyliv-Podilsky, there were a lot of artists-vytynankars…

– Well even if there were a lot of artists that doesn’t necessarily mean the activity was good. Certainly, it was the first of such a scale – with 40 participants. We haven’t had such an experience so far. 20 or 25 people had gathered earlier than that. But among these 40 people present lat time there were very poor ones so at most 30 people could have counted.

In addition, Mohyliv-Podilsky was called the capital of Ukrainian vytynanka way back by Volodymyr Pryadka (Ukrainian monumental-decorative artist and teacher — auth.). So, if Petrykivka is famous for its ornaments because everyone was painting there, then in Mohyliv everyone was occupied in cutting vytynankas – young and old. The first Vytynanka Museum is founded in Mohyliv-Podilsky. And what I don’t like there much is that they take anything as exhibits. Even if you are going to cut out something and bring to them they will take it. And when my own museum in Rubanivske is founded (Dniepropetrovsk region — auth.), there will be more thorough selection there and we will have only professional vytynankas.

– You were saying that the popularization of vytynanka has not come up to the level on which pysankas are at present. But you should agree that recently vytynanka has taken the proper place and people speak more about it.

– Yes, but not everyone knows what it is yet. By the way, one of the Donetsk banks has ordered 5 vytynanka works from me. It’s a wonder because Donetsk is a kind of region not to know even about pysankas and here you have vytynanka. In general I do not like orders much because I am a free person. But anyway I took the order. They wanted to have a tree of life in oval shapes and only in the red color. And they were controlling everything – the pattern and the color. In the end it was a great success, just superb! And the payment was good. 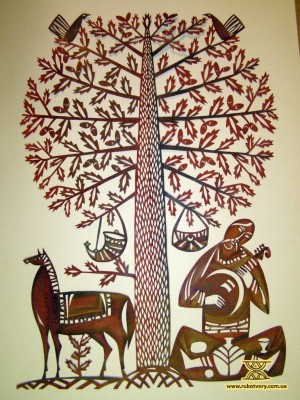 And all those vytynankas that I have made will be used in the bank’s logotypes, on visit cards and in general on all the cover pages. So it means high-quality advertising to both the bank and the vytynanka itself.

Actually, I don’t know how many vytynankas I have made. If to count all the vytynankas I used to make from standard stationery, the number will be even larger. Speaking about the most complicated ones, it can be said there are probably 150-200 of them. And in general they can run to a thousand.

– When in your opinion vytynanka will become a brand of Ukraine? What is required for this?

– Vytynanka is already quietly turning into a brand. And after publishing the album “A hundred years of the Ukrainian vytynanka” which has been in development for several years now, the issue of the vytynanka as a brand will be closed. The album will have more than 300 pages. But publishing the book requires extensive financial resources, about 70 thousand USD in total. So we are in search of them at present.

– At what stage is the development of the album now?

– Material from the total of Ukraine is already collected. We still have to hold a council of scientific workers and art specialists for discussions and approval.

Tweet
If you find a mistake in the text, select it and press Ctrl + Enter, please
Related Posts
What's newAll news
Subscribe to NewsletterHide
1147 users has subscribed
Subscribe

Rukotvory, 2009-2020.Articles, photographs and videos are the intellectual property of their authors.
We welcome spreading of the content with obligatory references to the sources.
Site powered by Wordpress
Designed by: Bohdan Hdal