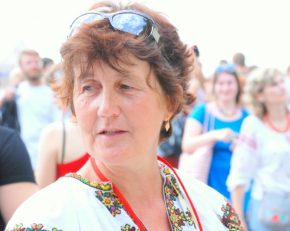 A weaver from Verkhovyna district of Ivano-Frankivsk region keeps ten sheep and uses their wool for her handiworks: liznnycks (homespun blankets), carpets, runners, belts, zapaskas (a kind of not sawn skirt of apron worn over the chemise from the front and from behind). She learned this craft from her neighbor and has been occupied in it for more than 35 years.

Different woolen articles – carpets, lizhnycks, runners, belts, zapaskas this master weaves on the looms of different constructions. For instance, the loom required for carpets should be a meter and a half wide; for lizhnycks — two meters and a half. Vasylyna herself invents ornaments for her handiworks taking traditional ornaments as the basis. She dyes the wool for her works by natural dyes from oak and walnut bark.