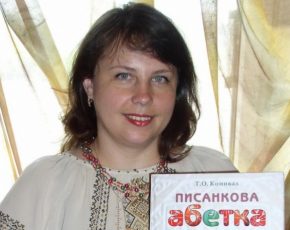 A well-known pysankar from Luhansk region. She is famous not only for her work in the revival of the traditional folk art in the Luhansk region and for creating of over 10 thousand pysanky, but also for her invention of a unique technique of creating carved relief ornamentation on eggs by means of vinegar etching.

Beside the hen’s eggs the artist works with geese and ostriches’ eggs. She uses several techniques in their ornamenting. They are traditional wax technique (with which multicolored pysankas are obtained) and the etchning technique invented by the Tetyana Konoval. Using this etching technique it is possible to create pysanky with brown hues and ornaments on a white background. The ornament on such etched pysankas is raised as if it were carved.

Tetyana Konoval learned from an ancient pysanka catalogue that master craftsmen had once used a method of acidification to created etched pysanky. There was only a general description of the method given, so she had to reinvent this technique. The design is protected by a layer of wax, and vinegar is applied to the rest of the shell to etch it.