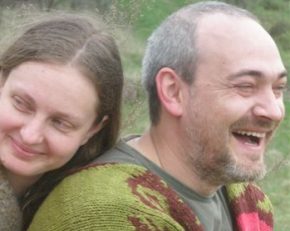 “Moksha” project was born in Vinnytsya in 2007. Since then under the guidance of its co-founder Sashko Bo-Hi, dozen of local tailors sewing creative clothes have been using only natural textile materials – fabric-flax, cotton and wool.

Designers devoted their first clothes collection to the ancient Trypillya culture, which existed between 5400 – 2750 BC at the territory of Ukraine as scientists state. The clothes were decorated with special ornaments and symbols which we know from excavated remains of Trypillya civilization. Besides, to underline the depth of Trypillya messages, the most moving poems’ extracts of famous Ukrainian author Bohdan-Ihor Antonych were sewn on the garments by the Moksha designers. Combination of symbolic ancient ornaments and philosophical author’s dicta helps to create modern clothes which is full of sense and emits positive warm energy.