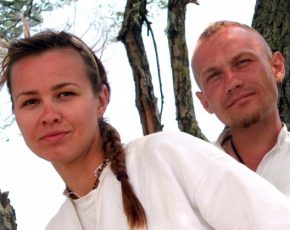 These artists are creators of folk pictures from Kyiv. The young artists paint icons and Cossack Mamay in different interpretations, colors and plot conceptions. The artists treat each of their works heartily following their vocations.

The icon on glass is a phenomenon in the national culture. In it, the spirit of centuries, generic memory and a part of the national soul are preserved. Often, watching masterpieces of mostly unknown creators, we feel some peculiar power beaming even from the seemingly naïve and almost childish images of saints. It is not strange because folk masters created their icons with their hearts putting their own spiritual world, their feeling of God into them and taking into account at most their tastes, feelings, manners of their environment and deep established traditions of icon painting in their local regions. “It is possible to become an artist borrowing rules from books instead of the heart – Stendhal used to say. It is a misfortune of our epoch that we have collections of such rules. ”

Icons or rather sacred images on glass were spread mostly in the Carpathian, Bukovyna, Gutsul, Pokuttya regions and at the adjacent territories.

First place in the folk pantheon has always belonged to Jesus Christ and the Blessed Virgin. They have always been the most popular except for maybe Saint Nicholas and Saint George who has always been thought of as a national hero protecting the good and the belief. People used to like keeping sacred images of Saint Barbara, Saint Paraskevi, Kateryna, Basil, Elijah, Peter and Paul very much.

Iconographic contents of the sacred images are connected more with folk world perception than with the church dogmatism. Folk masters were not familiar with iconography very well but they were able to communicate the deepest points of Christianity to the ordinary people.