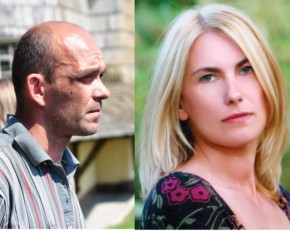 “We were born and formed as folk artists in the region known for its original folk crafts. Making of toys among them was the brightest. This craft existed in Yavoriv before the 1980s. Many generations of Ukrainian children grew up with these toys. However, old masters departed taking with them the tradition. New artists, which sporadically turned to making traditional toys, usually lower it to the level of kitsch souvenir.

Now we are working on the revival of traditional Yavoriv toys. Prototypes of our work are folk toys that are preserved in the collections of the Andrey Sheptytsky National Museum in Lviv, Ethnographic Museum in Lviv, other museums and private collections. Besides that, we are trying to use our own creativity in this area that is not in conflict with traditional art, but also enriches traditional wooden toy from Yavoriv”.

Ostap Sojka was born in 1966, Oksana Kohut – in 1972. Both of them were born in Yaniv town, Yavoriv district, Lviv region