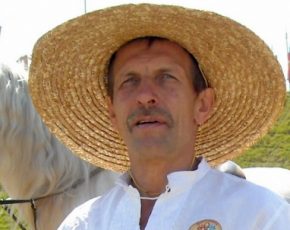 Olexander is a Kyiv master of one of the most ancient folk arts – withe weaving. Archeologists say this craft had appeared much earlier than pottery, weaving, wood and metal processing did – back during the Stone Age.

The master has been occupied in the withe weaving for 20 years. He mastered the basics of this craft himself. From withe, the master weaves different works: bread baskets, different baskets (Easter ones, for Newspapers, umbrellas, linen); carts, inlays, standard lamps etc. Sometimes he uses acacia twigs in his works.