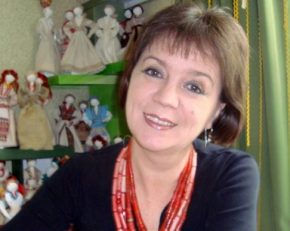 Oksana is a doll-maker and a pysankar from Lviv. For nearly twenty years she has traditionally been ornamenting pysankas for the Easter. As for dolls, the master became interested in them not long ago but devotedly and with great inspiration. She has already made about fifty dolls and her ideas will last for as many as a half of a thousand.

“I’ve been occupied in doll-making not for a long time, but I’ve already made about fifty of these dolls, and as for ideas, I probably have them for a half of a thousand ones more. I like making dolls in cycles. At present, „Carpathya“ is ready with its subtopics: „Girls“, „Housewives“ and „Molodytsyas“ (young married women). I also have „Princesses“, „Boyarynias“, „Lviv ladies“, „Pink ladies, „Poppy flowers“, „Seasons“, „For coffee“ etc. Practically each doll has its name. A special pleasure for me is completion of each head: to place an ochipok, to tie a shawl, to weave a wreath or a chiltse (a decorative head band characteristic of Gutsul culture).”

The master also ornaments pysankas, several tens of them each year. She depicts both traditional and original patterns on them. With these pysankas Oksana greets her family and friends during the Easter.