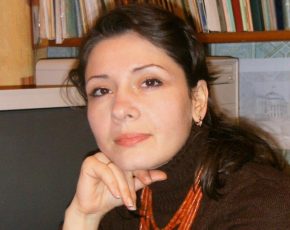 Natalia is an artist from Poltava. She paints on glass. The themes of her works are various pieces of still life, landscapes and compositions. Through them, the artist discloses rites and customs of the Ukrainian people, their values and sacred objects.

Together with reviving a forgotten until recent time folk technique of painting on glass the artist propagates and popularizes it and conducts master-classes devoted to this art.

Natalia Dihtyar’s works on glass are of different themes; they are pieces of still life, landscapes and compositions. The folk art and folklore themselves are a source of creative inspiration for the artist. The artist transforms in her own vision such classical plots of national pictures as “Cossack Mamay”, “a Cossack and a girl at the well”, “an angel guarding children”, “countryside”. Thus, the artist has created a series of works connected with age-old values of the Ukrainian people: (“Family” (2006), “Cossack Mamay” (2007), “ a Cossack and a girl“ (2007), “day-dreaming” (2007), “a forefather” (2007), “Beregynya” (2008)).

The artist successfully stylizes and adapts images of nature of her region to the technique of painting on glass: flowers and trees: (“Giants” (2008), “Milfoil blooming” (2008), “Growing dark” (2009)).