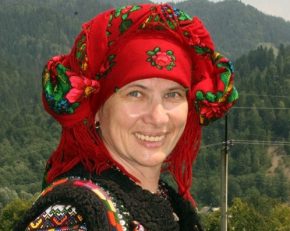 Maria is a well-known pysankar from Lviv, from Ivano-Frankivsk by origin. She investigates pysankas from the entire region and reproduces them. Especially she likes Gutsul ones. Besides, she is interested in weaving on looms, straw weaving and motanka-dolls.

Maria is convinced that “water, fire and bee wax together with a series of symbols give strength of an obereg to pysankas”.

Maria likes to ornament Gutsul pysankas in which yellow-orange, red, purple and brown colors prevail. As a basis, she often takes ornaments form the book by Volodymyr Shukhevych called “Gutsul area”, issued way back in 1904 in three volumes. This author in his work included the pysanka descriptions and tables with pictures for colored ornaments and patterns for black-and-white ones (18 of the colored and 36 of the black-and-white ones).