Unique wreaths of goose feathers are manufactured in the Kolomiya region 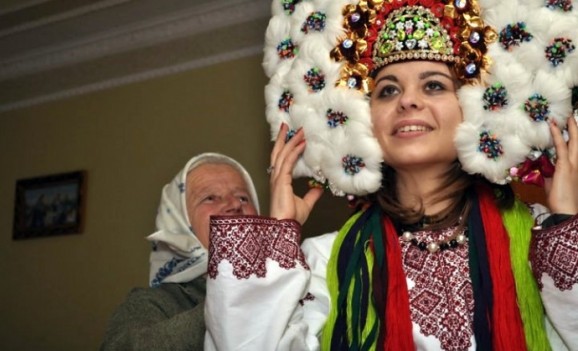 Is it possible to do better than participants of the Brazilian Carnival? – With ease! Head-dresses that can be considered works of art have been manufactured in the Veliky Klyuchiv region since long ago. Paraska Kushlyak’s wreaths made of goose feathers are really unique works. They embody ancient wedding traditions and are original in their decorations. Each wreath weighs about a kilo. We visited the master and even tried on an ancient wedding costume with a head-dress. 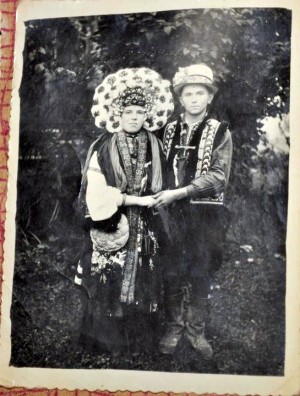 Earlier, weddings used to be celebrated from Mondays to Tuesdays or even from Tuesdays to Wednesdays. Each bride’s mother used to order a wedding wreath form a special master called pletelnytsya (and Kosiv had several of them at the times). On the wedding’s eve this master used to come to the bride and dress her. The bride’s hair was done tightly; two small locks that were left were tied together, smeared with honey and fixed into “flies” (that was the name for these locks). Then an embroidered band – a vyshyvanka – was laid over these “flies” and, on the top of everything – a large “uplitka” – a kind of a net-cap made of braided wool threads. Each component of the wreath was to be put on independently making the process of the bride’s dressing as long as two hours at the least. As for the wedding day, the bride used to walk down the aisle wearing the wreath upon her loose hair. By the way, bridesmaids also wore wreaths of goose feathers but their wreaths were smaller and besides, the bride’s wreath was always decorated by periwinkles.

I take several feathers and try to make a correct bunch of them together with the lady.

– Is this correct? – I show the freshly arranged feathers to the master.

Pani Paraska rearranges them a bit:

– Feathers have to be of approximately the same size, and fluffy ones, too; not all feathers are suited for the work.

The next step is to tie the obtained bunches together from below using a thread. Each bunch has 5 or 6 feathers; each “plait” requires 6 of such bunches. 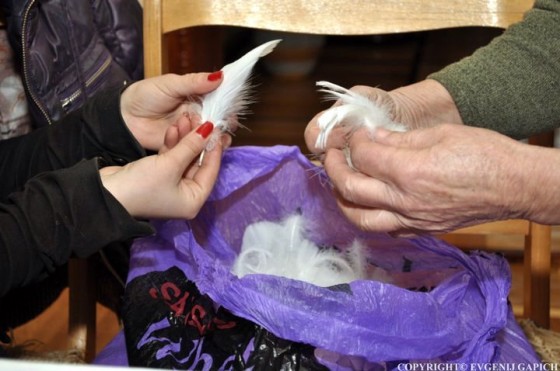 Feathers should be of the same sizes, so they need special attention. The feathers shown to the left are not suitable because they are too big; they should be fluffier. 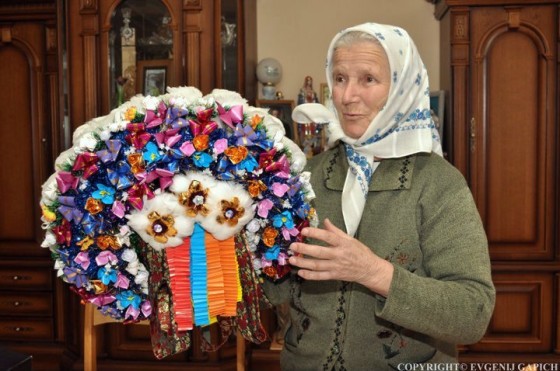 “Plaits” (kosytsyas) are flowers which make the top of each horseshoe- shaped wreath. “A shaker” is placed in the middle of each kosytsya – it is the center decorated by threaded beads. The second row is strewn with golden flowers called “drashpans”. They used to be made of golden foil taken from the chocolates’ wrappers. And in the end the wreath is decorated by red roses called “ruzhas”.

The lower part of the wreath made of gems and beads is called “Vishyvka”. Its components are sewn or glued to the wreath. 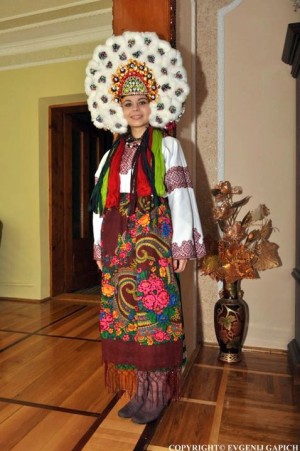 Grooms have head-dresses, too. Long ago they used to be made of straw and called “solomyankas” Each solomyanka was decorated by an embroidered band and a “zvizda” – a star. A thin stripe of bark taken from a sweet apple tree was laid upon. It was stuffed with rye, sugar and money. This composition was wrapped in “gold” i.e. golden paper. Such solomyankas had nine red buttons on top and three kosytsyas from behind. In the evening, the bride and the groom hid their head-dresses inside their pillows (so that no one would be able to steal them) and slept upon them.

Pani Paraska suggested that I should learn how it felt to be a bride in Kluchiv. First, I put on an embroidered shirt; I would even call it a dress because it reached down to my heels. A skirt of the traditional green color was the following component. After that, the master brought me a red shawl. Together with the lady I made a roll from a part of this shawl. From this point, the action got the character of a real carnival show: bunches of colored threads called “frost” in Kluchiv were put on my neck. Coral beads and a lot of other decorations went immediately after … The wreath was the final touch. It was hard to stand wearing it. I had to support it with my hands for it not to fall off my head. But in the old times brides had to sleep in these wreaths.

… Unfortunately, there are no people to whom pani Paraska could pass her skills. The lady says that people are interested in this craft but they do not want to learn it. Besides, young people do not wear such wreaths for weddings any more. Not long ago a unique wreath of Paraska Kushlyak was bought by Nina Matvienko (a famous Ukrainian folk singer). It would be a great pity if such works of art were found only in museums…