The biggest sheaf in the world is a Ukrainian one 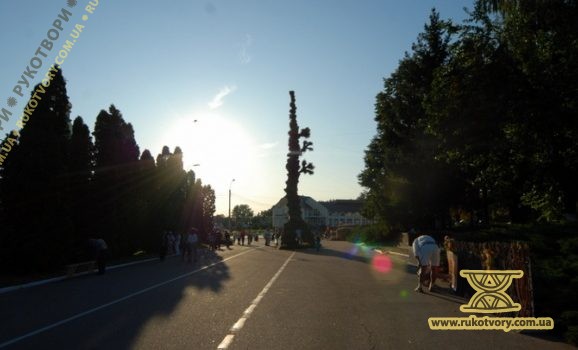 At the international ethnic festival “Harvesting” which took place in the middle of August in Kiev region a large sheaf was erected, having 15 meters of height. This case was even registered in the Ukrainian Record Book. The connoisseurs state that no sheaves of the kind have been erected anywhere in the world so far.

The rye giant had been prepared a week before the festival. It took three hundred sheaves of middle sizes to create it. All those not indifferent had been cropping rye in the local field. The sheaves (which are usually called didukhs before the Christmas holidays) had been made right at the place. Later all these sheaves were transported to the central square of Kovalivka. 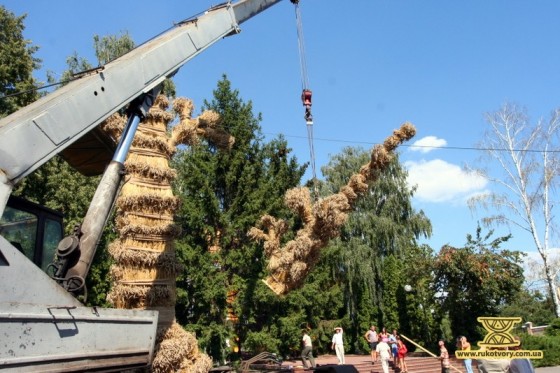 The sheaf was created by an experienced team of architects and constructors. Heaps of rye were lifted by a special crane to the upper levels of the straw sculpture which was fixed on a wooden frame. By and by the biggest Ukrainian sheaf was completed. This moment was officially registered in the Ukrainian Record Book. The organizers hope that this fact will not be missed by the Guinness Record Book, too.
Unfortunately, it is not possible to see this work of art any more. Because of a technical mistake during the erection the sheaf turned out to be not a long lasting one. It stood only for several days and then fell apart from the wind.

— It was a constructor mistake and the constructors admit it. Maybe a technical error had its effect as well because we erected the first module manually, which caused a failure in the further construction. The sheaf lasted for only the quiet weather of the following Monday and on Tuesday we had a moderate storm around noon. And that storm simply broke the sheaf. The record was held on the Sunday after the erection. The sheaf also lasted through the following Monday and till the Tuesday noon. And then unfortunately it broke.

However the sheaf’s fragility didn’t darken the impressions from the festival that lasted for two days. The program included traditional Ukrainian vechornitzi (the evening gathering and revel of youth), making stork nests, twining a real rocking cradle, and performance of authentic musical bands; master classes and lections in blacksmith craft, straw weaving, pottery, embroidery and other folk crafts. The festival guests were also proposed to try to crop rye, to thrash it and then to mill the grain with millstones to make flour. But to tell the truth it was not possible to taste newly-baked loafs. According to the organizers, due to all the mess they were not able to erect an oven for it. 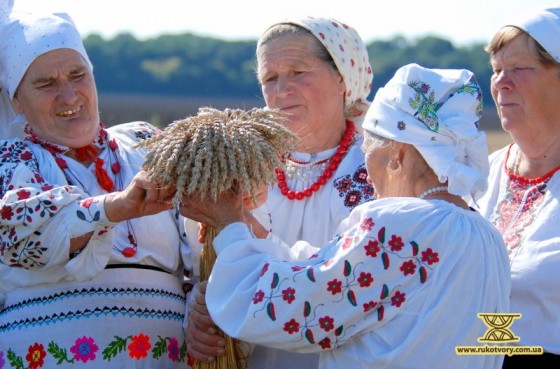 Nowadays only women sing in the villages

But then people had a lot pleasure from merry-making and singing. The local village people organized an authentic band. But to say the truth, only women were its participants.

— Among authentic performers there have never been any male representatives – neither young nor old. This problem is a global Ukrainian problem – that is, it is practically impossible to find a real old man who sings, so when it happens it really means luck. It turns out that historically women have always been more enduring. So, even men’s repertoire has always been performed only by women.

Be that as it may, the preparations for the next year have been started. And not to waste time the organizers announced a contest in cities and villages for the best place for the conduction of the “Harvesting-2010” festival. The organizational committee has already started to accept for consideration photos and video material containing the descriptions of the proposed places. So, as they say – this is “to be continued”…