Painting on glass by Valery Danysh 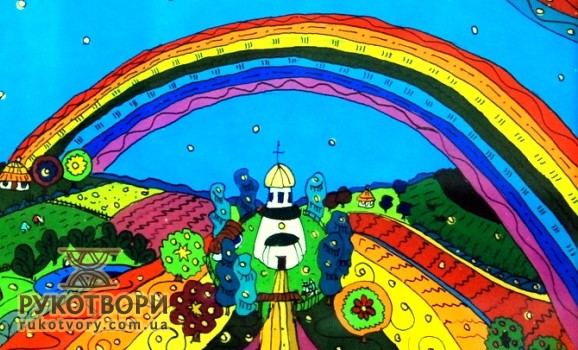 An angel by this artist painted on glass that I bought 5 years ago at the “Dream Country” festival is always at a display in my room. In this period other small works of folk art have surrounded the picture, but the angel remains at its place. It emits light positive energy which always energizes and inspires.

At the time I didn’t know Valery Danysh, this artist who paints on glass, in person. But his pictures instantly fell to my taste and I easily could make them out at all the following fairs and festivals in which the artist participated. 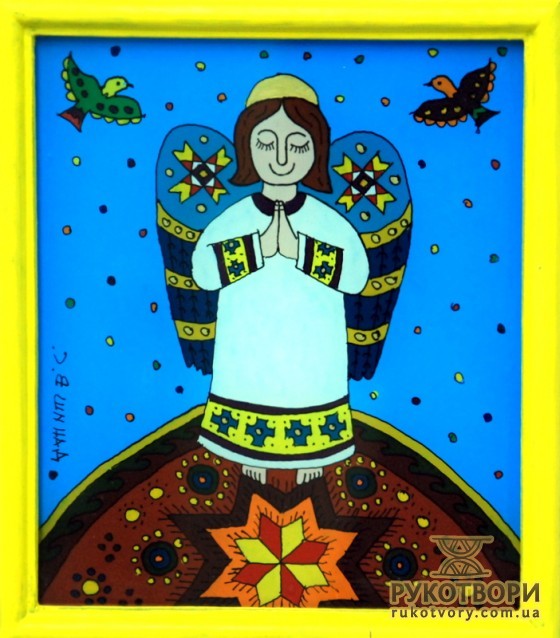 Smiling suns, merry pysankas holding their hands, always happy parents and their children, picturesque landscapes with villages of the Central Ukraine, ancient Ukrainian symbolism serving as a basis to grass, trees, snow and everything we see around. The works have a thin coating of humor; each of them has a hidden plot and multiple ways of interpretation. To me, Valery’s works were just such; in particular – thus I saw them at his last exhibition in the Kiev gallery “Lelya” (of Ukrainian Toy Workshop). There, the artist exhibited about fifty of his brightest works. Among them, there was a series of icons the images of which are based on the icons of the X-XI centuries of the Kyiv Rus period, and home icons of the late XIX – beginning of the XX century. 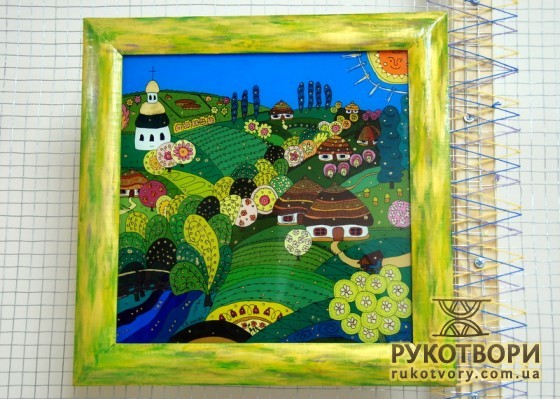 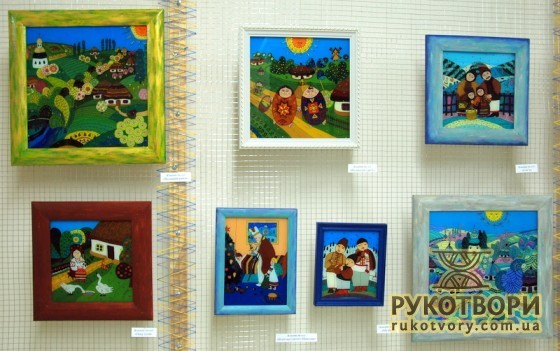 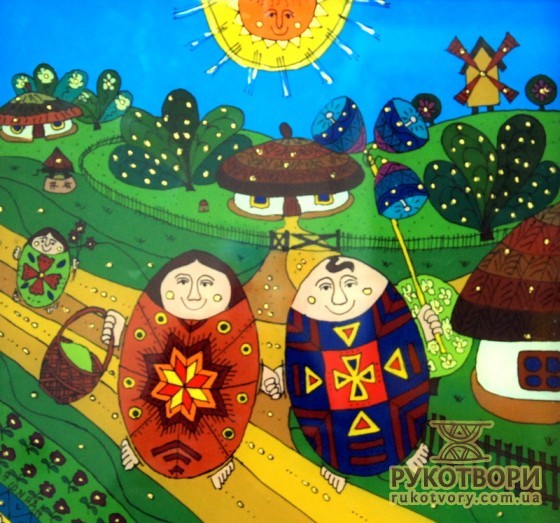 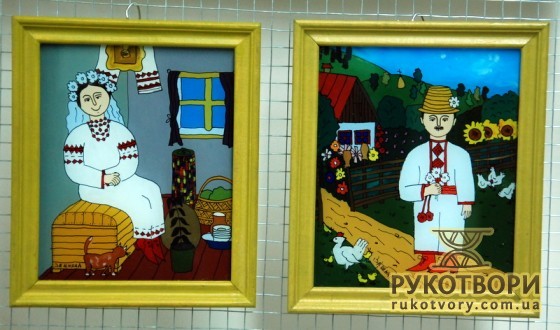 A bride and a groom 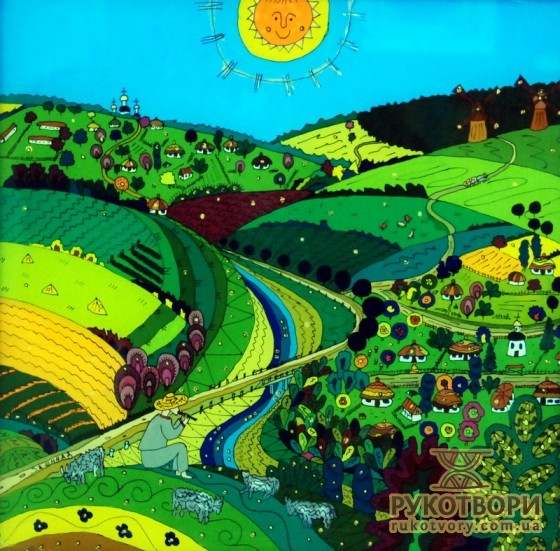 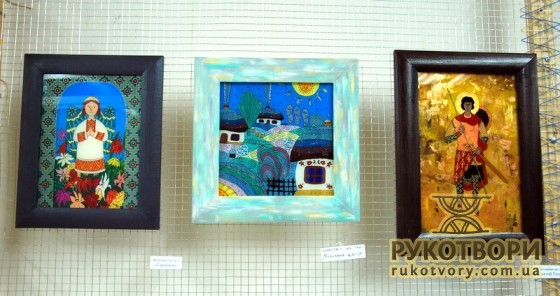 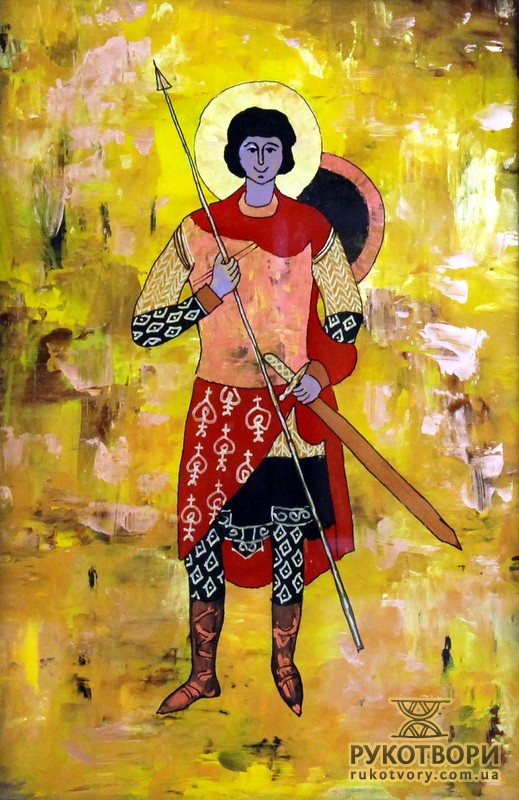 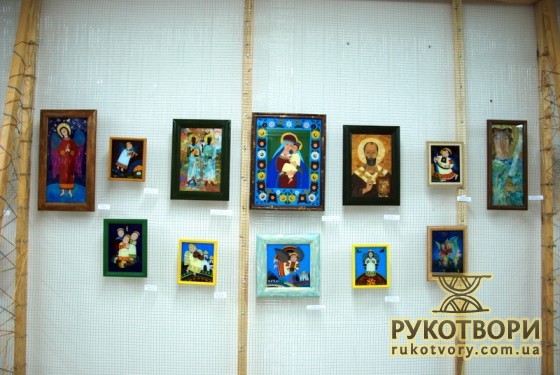 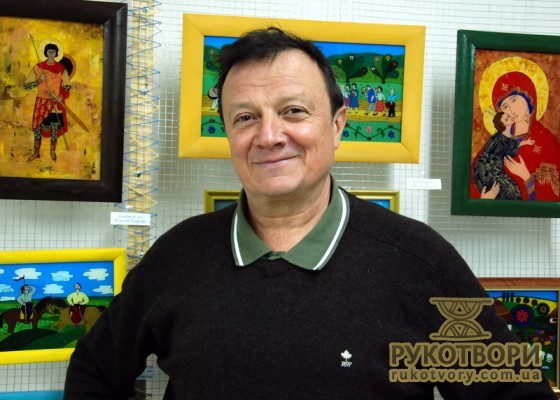 Valery Danysh, artist who paints on glass:
«There is a winter-theme work among others. It conveys a feeling everyone is familiar with: imagine sledging with other children during a school vacation, then – eventual dusk at 4 or 5 in the afternoon. Anyway you continue sliding down; there are fewer and fewer people in the street and then a moment comes when you slide down and see no one around and feel that the entire world is yours.

When painting the New Year tree, I depicted the decorations I used to have once. I had then a wooden horse installed on a board with four wheels. It could be pulled behind or one could sit on the horseback and move ahead pushing against the floor. I also had wooden cars. So I painted all that».

Valery Danysh, artist who paints on glass:
«Those icons used to be painted on wood so after a long period of time the colors are hardly seen on them. I’ve taken the plot as the basis and have made a decision to paint them on glass; but not to falsify or make them old; just make them bright.

Each home used to have an icon, in particular, of the Protective Virgin. So, each village had an artist who got orders for icons and he painted the Holy Virgin as well; she had let’s say guardian angels to the left and right behind her shoulders and below, under a cover, she held the entire family: father, mother, children, grandmother and grandfather. It was not possible to accurately paint the appearance of people so the images used to be schematic. Coming through generations, such icons became family relics».

According to Valery, he paints majority of his pictures “by memory”. He recalls his childhood or things he ever saw; he re-conceives them and transforms into a ready work of art. 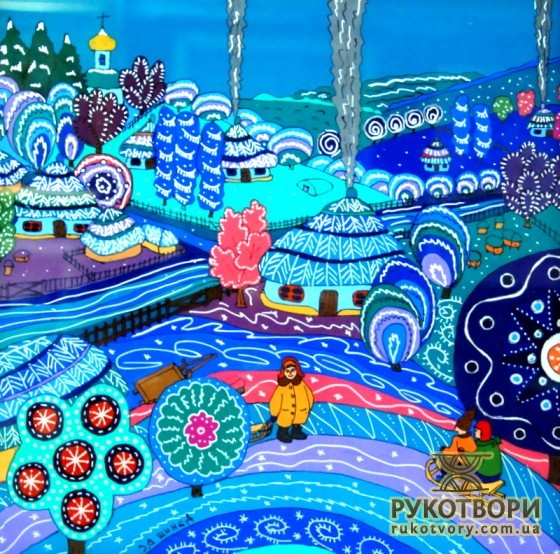 The author says that pictures with angels are of the greatest demand.

Valery Danysh, artist who paints on glass:
«It’s a kind of an angel establishment. Each person has a guardian angel, and some of people depending on the task with which they are sent to the Earth, have two or three of them and even more. These have archangels, seraphs over them, but they are the highest angels’ level. We are not accustomed to talking directly to angels who are actually guiding us and suggesting things in the form of intuition. We seldom listen to them and address God, the highest instance, directly. To my mind it is better to speak to your friend – your guardian angel, your mentor and tutor; the creature that loves us infinitely and will help us in everything. But often we do not have this kind of contact that is why I have made a series of works about angels; maybe they will to a large extent compensate for a lack of such communication».