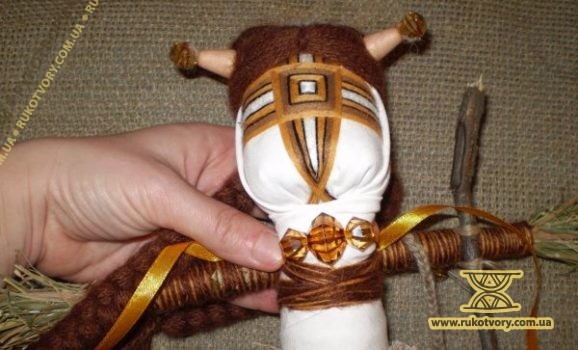 A detailed master class in making an elegant knot-doll was prepared by a doll-maker from Lviv Olena Tarasenko. Within several years she has mastered this art by herself and now eagerly shares her skills.

My dolls is an authentic stylization of a traditional knot doll called “Princess”. I present the main principles of its construction in accordance with the contents of Olexander Naidenov’s book “Ukrainian folk doll”. (Kyiv, “Stylos”, 2007).

Process of making a knot doll

The following will be needed for making a doll 28-30 cm. high.

The following instruments are to be used:

Fold the piece of calico so as to make a strip (Pic. 3). Approximate strip width should be 8-9 cm. Make a kind of a roll from this strip (Pic. 4). Tear the piece of coarse cotton in two. Leave aside one of the obtained pieces and tear the second one in two strips. Insert the ‘roll” into one of these strips (Pic. 5), then wrap it tightly into the fabric (Pic. 6) and tie up with a tread (Pic. 7).

Laying out a cross. I’ve chosen the brown color spectrum though it is not a traditional one. For me, the warm shades of brown mean warmth and comfort. It’s up to you to choose the sequence of colors. I’ve decided to start with white (Pic. 8). Pictures 9-13 show the process of making the cross. You can make the cross wider or narrower to suit your intentions (Pictures 14-17).

Fasten the doll head to the bare core of the corn ear by acrylic threads (Pictures 18-20).

Decoration of the doll

I’ve decided to make a doll in the form of a small mischievous devil. Several days ago I was drinking coffee with a colleague of mine and she complained that her daughter was given a part of an old witch Baba-Yaga (from Russian folk-tales) in a school performance. They said she had talent in playing peculiar characters. But you know each girl dreams of playing a character not less beautiful than a princess…

The following will be needed for decoration (Pic. 28):

— a small wisp of hay (can be bought in a pet shop);
— a piece of fabric for the skirt (I have flax 25×50 cm);
— narrow lace for the skirt decoration;
— small pieces for the apron (I have prepared a small embroidery and a piece of sacking);
— wooden and plastic beads or necklaces;
— yarn (woolen-acrylic) for plaits and for fastening arms (woolen). 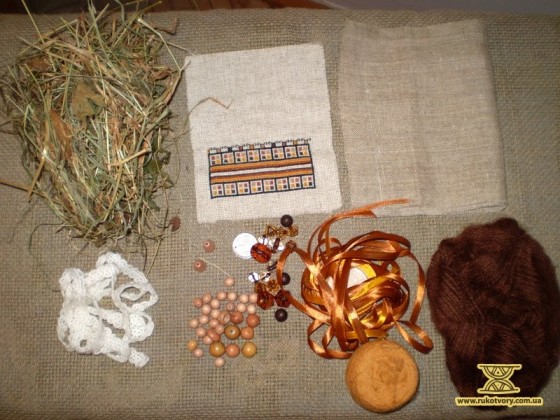 Straighten the hay so that it would have the same layer thickness along the entire length and wind the treads around it (Pic. 29). From my point of view the length of the arms should be a bit shorter than the doll’s height. The arm thickness will be about one third of the doll’s thickness (Pic. 30). Attach the arms to the doll (Pic 31).

Making the plaits. Prepare the yarn (Pic. 32). For long plaits the yarn length should exceed the doll’s height; for instance, I leave it 60-65 cm. Tie up the yarn in the middle, attach to the doll’s forehead and plait it (Pictures 33-36).

Finish and fasten the apron (Pictures 41-43). Attach several threads at the small of the back of the doll from behind and plait them: they will make the tail of our small devil (Pic. 44).
For the horns I’ve found two conical wooden and two plastic beads and fixed them on a thick thread (Pic. 45). Here you can see the horns: fix them on the forehead (Pic. 46). 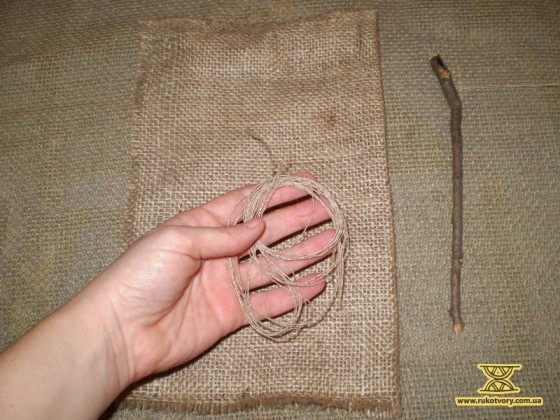 Pull out a bunch of threads from the sacking. Place them against the stick, around it, (Pic.48) up to approximately one third of the stick’s length (Pic. 49). Straighten the threads down and tie them up (Pictures 50-51). Attach the broom to the doll’s hand (Pic. 52).

The final touch: string several beads on the lace and tie it in an attractive bow (Pic. 53).

Isn’t it a beauty! 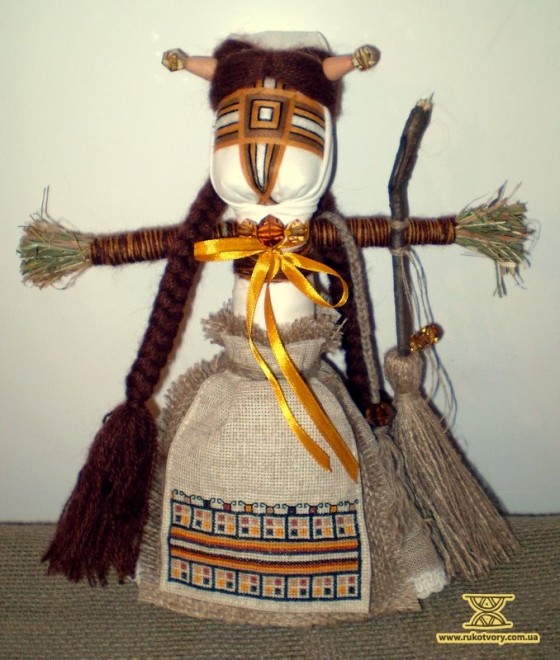 Pictures and text by Olena Tarasenko