Beads are sacred for Huichol Indians 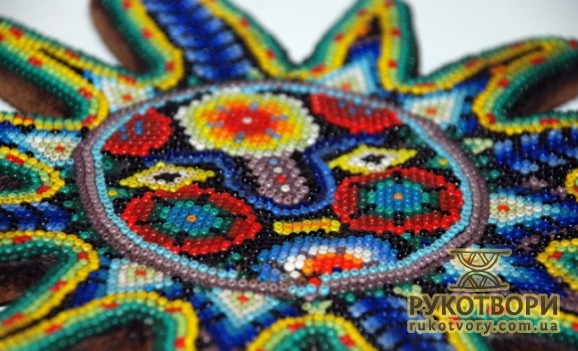 By and by, Ukrainians are starting to master the art of Mexican Huichol Indians. Andriy, a 33-year old Kyiver, has played an Indian in a film of Mykhailo Illenko called “The one who has gone though the fire”. For many years, Andriy has been a fan of the culture of the North American Indians. In his leisure time, he creates different souvenirs decorated by beads in the ancient traditions of Mexican tribes. Often he decorates clothes with beads, shoes in particular. 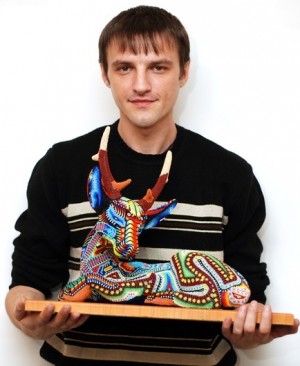 Andriy, a master of bead weaving, follower of the Huichol art traditions:
«To me, beads, namely each separate bead is a tiny creature with its character, mood, tricks and soul… When taking beads into my hands, I noticed several times that my fingers take the necessary number of beads at once. From this point, the most interesting thing starts: beads begin to come alive; some of them are threaded with pleasure, some start to run away from the needle. It is a kind of a play. Some beads want to be used in the item’s decorations; others run away and hide on the floor and in the darkest corners. They keep hiding till I find them… Some of the Indian tribes in the North America used to have communities of ladies-embroiders; when making sacred things, these ladies used to say a prayer for each bead stitch before making it. No wonder, all these things were of great use to their masters… Yes, it is an extract from my book; each person has his own way. On my way, beads were of great help in many situations. But creative art of the Huichol produced the strongest impression on me. I found a lot of information about this nation, its world outlook, religion, about the secrets of their arts and crafts, and in the process I became more and more attracted…» 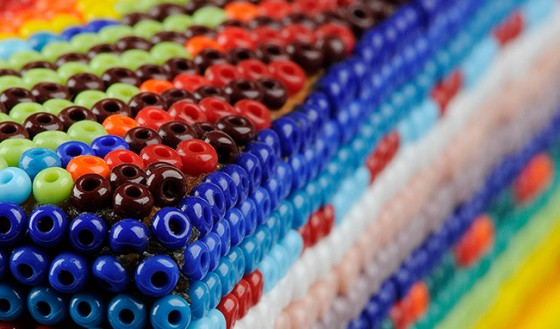 Huichol is an ancient Indian tribe inhabiting West and Central Mexico. The total number of people in this ethnic group varies from several tens to forty hundred in accordance with different data sources. This is practically a drop in the ocean when comparing to the nearly hundred million of population at the North American continent. However, it’s the art of Huichol among more than 60 other nationalities that has become known around the world due to its uniqueness.

Some scientists call Huichol “a tribe of artists” or “a nationality with artistic perception of the world”. Their art, known as “Huichol Art” is not a simple decoration of beauty but a direct extension of their religion: the Indians express different concepts of their belief in the material and fill their works with sacral contents. Until present, Huichol Indians have preserved their traditional ceremonies and cults based on shamanism, nagualizm, animism and belief in magic.

Johannes Nairat (Austria), a research worker from the National Institute of anthropology and history of Mexico. Starting from 1992, he has been occupied in field works among the Huichol and Cora nationalities. (An extract from the text published in the magazine “Mexican arts”, № 75, 2005): 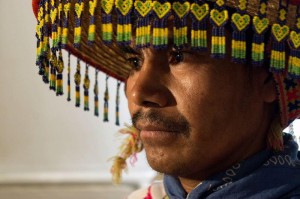 Pascual Lopez Ramirez, a folk master from the Huichol community Puerto Huamuchil. At the beginning of June, 2011 he conducted a master-class in the frames of the opening of the

«Traditionally, Huichol occupy the territory located in the Western Sierra Madre Mountains, the boundary territory among the Jalisco, Nayarit, Durango and Zacatecas states. Some anthropologists learned about this culture in the XIX century. At once, it drew attention of researches by its exquisite embroidery and fabrics and elegance of its ritual items.

Starting from 1960, the knowledge about Huichol and their art began to spread; mostly due to organization of centers of folk arts beyond the mountainous territory in such states and cities as Nayarit, Jalisco, San Luis Potosi, Mexico and Nuevo Leon.

Most often, Huichol art was characterized as shaman art because of the use of peyote (a cactus without thorns containing hallucinogen – editor) or other hallucinogenic plants when making icons; or because of the expressive ways in different examples of this art. Huichol religion preserves the organized mythology and complicated ceremonial system. In this sense, some pieces of Huichol art still have ritual and shaman specifics but not due to the context of their application; it is because they are the product of imagination of the artists. 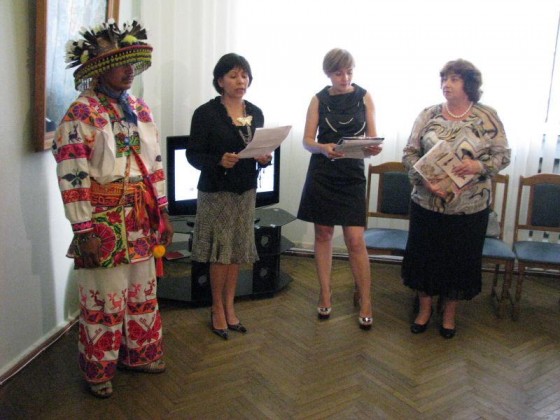 During the opening of the exhibition devoted to the Huichol art 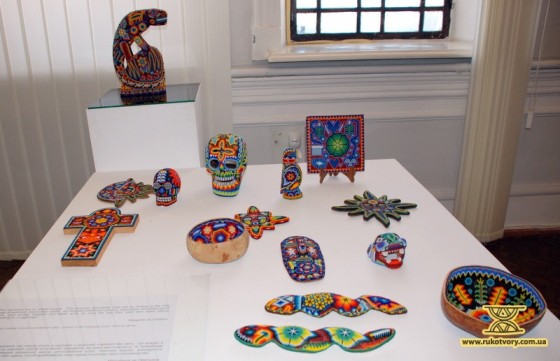 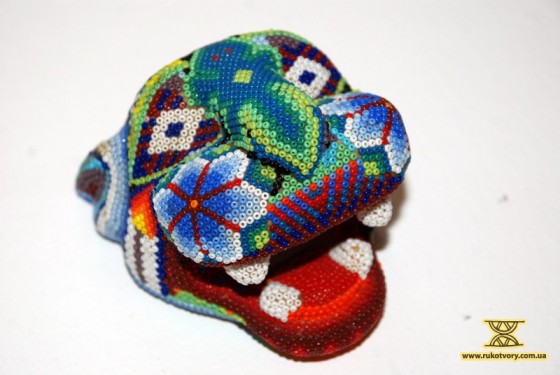 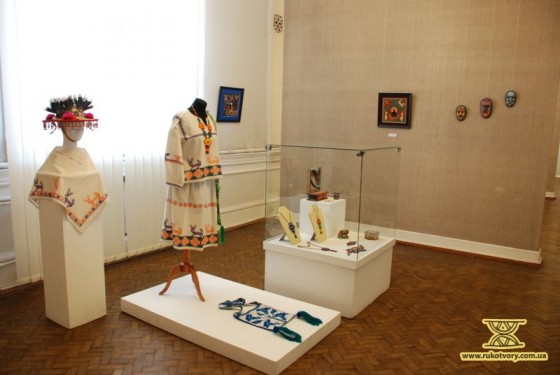 Traditional Huichol costumes were also represented at the exhibition 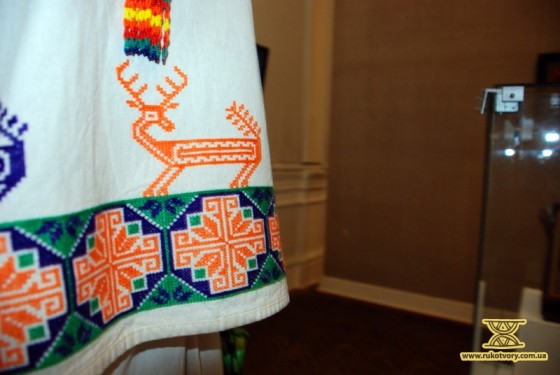 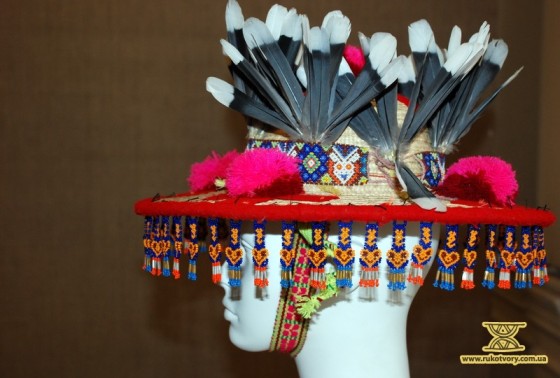 Huichol are occupied in fabric weaving, embroidery, ornamental braiding, painting, leather currying; they make arrows and bows, musical instruments; their ritual items are especially famous, in particular – wooden and ceramic figures in the shapes of animals and decorative vessels decorated with beads. Beads are arranged on wooden workpieces which are waxed and covered with a layer with pine sap using pincers or needles.

It needs to be mentioned that work with beads is a rather young occupation for Huichol. Though actually similar items appeared in their culture long before the Spanish conquest, in the ancient times the Indians used to work with natural materials instead of beads: bones, clay, corals, stones, sea and egg shells, grains; sometimes even insects dried and painted with natural dyes were put to use as well. Beads appeared together with Europeans. 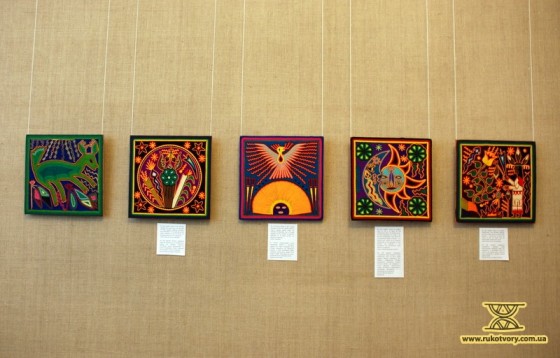 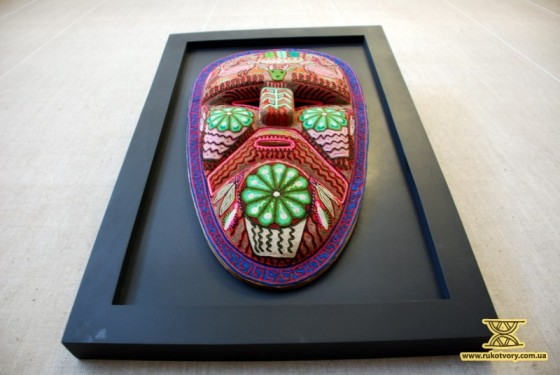 The mask is symbolizing strength and power of its owner 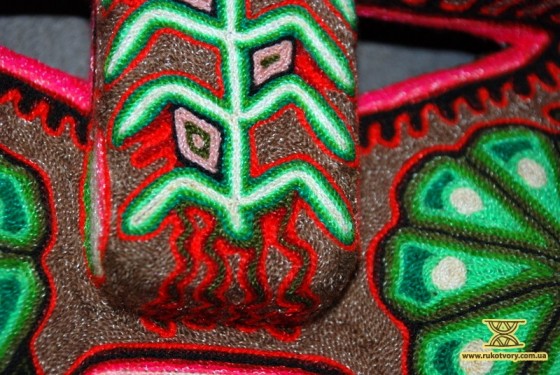 A mask decorated by woolen threads

So-called nierika (two-sided pictures made using woolen threads glued to a surface which is covered with a mixture of wax and resin) are also well-known in the traditional Huichol art. Such plates can be seen in home sanctuaries, temples, saint caves. Nierika is a guide to the spirit world and it is called “a two-faced mirror” (both of its sides are covered with pictures). In the middle it has an opening – a magic “eye”, though which people and gods can see each other. After completion of such a picture, the artist leaves his signature on the reverse side of the plate and usually writes a short explanation of the work’s symbolism. 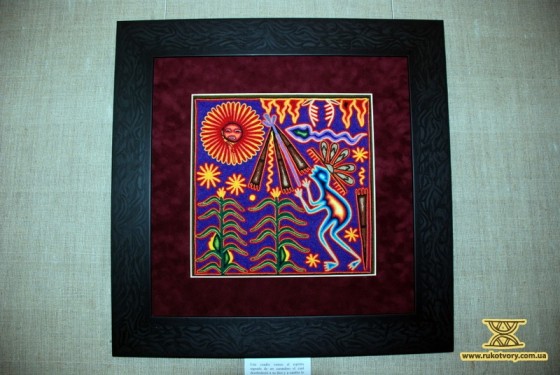 In this picture, there is a saint spirit of a shaman who has disobeyed his god and has now to present him with gifts, for the god to see the shaman’s sins, for him to be able later to take the gifts to the sacred cave. The author: Rosa de la Cruz Medina

The first exhibition of pictures made using this technique took place in Guadalajarain 1962. For today, wide varieties of the wool color allow for creation of complicated compositions which can be considered real works of art. Some of the Huichol artists have managed to reach significant popularity and commercial success, for instance, Jose Benitez Sanchez, who exhibited his works in the US.

Johannes Nairat (Austria) (his position is mentioned above – editor), Olivia Kindl (France) — a research worker in the Institute of anthropology and history of the National Autonomous University of Mexico (An extract from the text published in the magazine “Mexican arts”, № 75, 2005):

«There are significant differences in ritual works and those intended for sale. Bowls for home usage, in contrast to ritual ones, demonstrate brighter color palette, have totally ornamented surface and their design corresponds to the symmetry and geometry principles; in most cases they are hexagonal (having 6 angles – editor). Images on the items intended for sale are arranged in the way similar to the one used for cross-stitching. In contrast to this, ritual items do not follow the geometry of the works intended for every day usage.

Such materials as wax, beads, wool and cotton sanctify the ceremonial items and gifts. For example, beads are a symbol of water that is why they cover the internal surface of the bowls used as excellent water vessels. At present, beads are sacred for Huichol; in particular, for ladies who can make ritual ornamented bowls “beads mean life”. Tiny colored beads are also compared to corn grains and they are used in rituals that can be conducted for purification».

At present, Huichol make handiworks mainly for sale, for tourists; it is because this is practically the only way to survive for the tribe. But despite the difficulties, this Mexican nationality has been able to protect its ancient culture and to open for interaction with the external world. During the last decades especially, masters have developed new forms of artistic representation, having reached impressive results. For example, nowadays new aesthetic shapes come to life; they combine old times and modernity and demonstrate that Huichol have alive and dynamic traditions.

Meaning of the Huichol symbols:

A mask: shows strength and power of its owner
An eagle-owl: Messenger of the future
A toad: Health protection
An ornamented bowl: items used by shamans
A coyote: Fire messenger
A star: Protector of love
A tortoise: Rain’s goddess
A candle: A gift to gods
An eclipse: The unity of man and woman
An iguana: Spirit’s eyes
A deer: Gods’ messenger
An eagle: Land’s energy
A jaguar: Shaman’s god
A peyote: The symbol of life and success
Corn: Health and prosperity
A butterfly: Luck
A bird: Freedom
A wolf: Knowledge and wisdom
The Sun: Life’s energy
The Moon: Fertility
An elephant: Protector of the family
A snake: The god of the ocean
An arrow: The most important shaman’s instrument
A shaman: A witch-doctor
God’s eye: Protector of children