A Gutsul way for “Enjoy your meal” 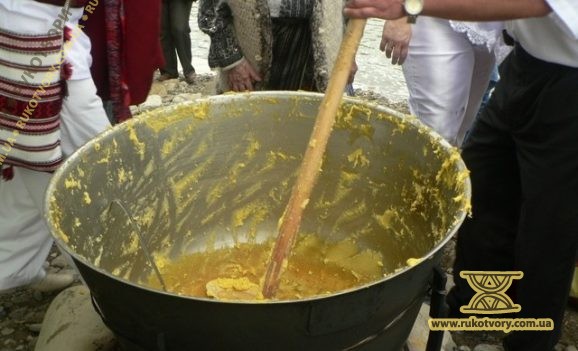 A folk festival – without “strong gutsul gorilka (Ukrainian for “vodka”) or banush with brynza (corn dish with sheep or goat home-made cheese) and cracklings” as it was artistically pronounced from the stage, but yet with standard attributes of a fair: shashlik, beer, kvass, gorilka… that was how the International Gutsul Festival in Vyzhnytsya started on the 29th of August and lasted for two days.

What was the most impressive?

First, at the festival the largest pot of kulesha (dish from corn flour) in Ukraine was cooked (140 liters), which fact was officially registered by the representatives of the Book of Ukrainian Records.

Second, for the first time in the last 30 years a Gutsul daraba (logs attached to each other and fixed together) was rafted down the Cheremosh stream. Way back the local population used the river stream this way to float the logs. Such rafting, the same as any other event in the Gutsul economic life (let’s only recall the yearly spring coming out to polonyna (meaning mountain valley)), used to be accompanied by corresponding rituals and traditions. And it used to be a great holiday!

Vizhnytsya people were also glad to visit a place with works of national artists that was arranged behind the smaller stage in the town center. Authentic works such as clay whistles, embroidered national shirts and towels – rushnyks, items carved from wood, necklaces and even manually forged works were presented at the place. 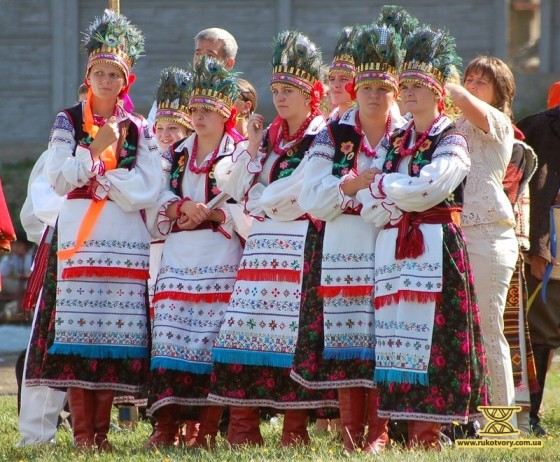 No authentic cuisine, not a single Gutsul dish widely known beyond the Ukrainian borders. But I can recall the fact that even during the “Novelty-fest” in Chernivtsy one could treat oneself to wonderful banush with cracklings at a low price!

There was an impression that the festival had formal character and looked like a tribute to the old soviet traditions; it was not organized to really entertain people. It was said: we have organized the festival, invited different bands, provided board and lodging for them, we’ve informed the public via newspapers – so what else do you expect?

And the visitors were not many. If to count 1600 participants from different regions of Ukraine, Romania, Russia, support groups, official representatives and mass media then one can say that hardly anyone came to the festival on the first day, even from the Vizhnytsya community.
As for the daraba, it didn’t go a long way in spite of all the symbolism of this event. 500 meters down the current life guards were already waiting for the daraba. They caught it, attached a tow-line to it and safely “evacuated” the “passengers”. It was not a wonder actually because all the highest local authorities were rafting on this daraba, and they had solemnly and nicely knocked back several gorilka glasses before the event. 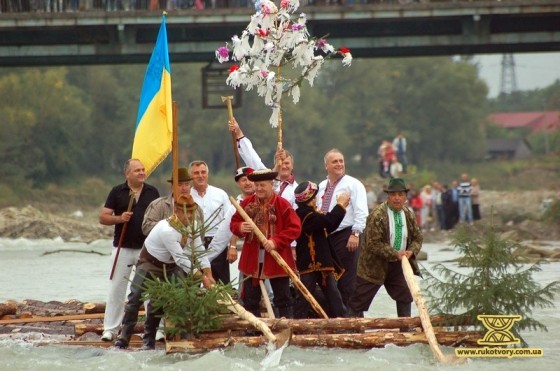 Local authorities rafting on the daraba

Also, at the stadium where the large stage was located and the main performance took place all the items for selling were “made in China”. In what way do Chinese toys for children in the forms of different guns, cars, toys, tanks or moulded clay pots with signs in Russian saying “enjoy your meal” concern a Gutsul folk festival?

Just imagine that there were trading booths along the four stadium sides and each of them had   Chinese stuff of a very low quality at overprices. Certainly the festival obtained a look of a local fair.

International Gutsul Festival takes place each year at the territories of Ivano-Frankivsk, Chernivtsi and Zakarpattya regions – Gutsul areas in Ukraine. The next, 19th, Gutsul Festival is to be held in Kyiv. The organizers promise to make it more extended than the one held this year.

Mykola Kostynyan, for Rukotvory
The pictures are by the author; the picture of the kulesha – by Myroslava Akentyeva
Tweet
If you find a mistake in the text, select it and press Ctrl + Enter, please
RecommendGo to Shop
Related Posts
What's newAll news
Subscribe to NewsletterHide
1147 users has subscribed
Subscribe